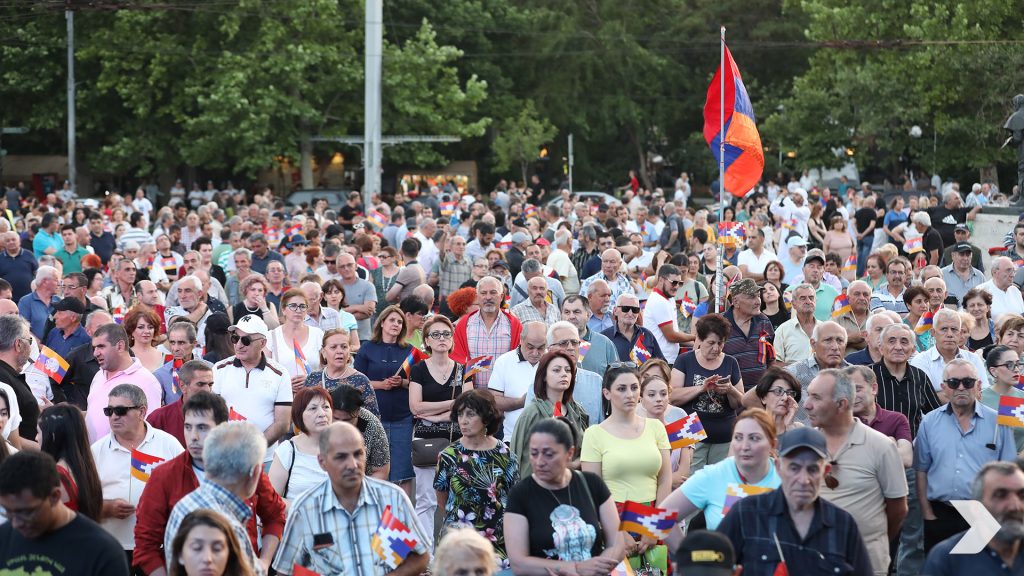 In their speeches, the opposition figures substantiated the imperative of the resignation of the current Armenian regime, presented their vision for building a new type of state. They also outlined their priorities and discussed the steps needed to lead the nation out of the current dire situation..

“The basis of reforms in the Armed Forces is the individual, the serviceperson, who must receive the necessary professional education, and at the same time be provided with socio-economic security. Our ultimate goal should be to get the most out of our limited resources. There will be no reform without the removal of this government,” Tigran Abrahamyan said in his speech.

In his speech , Tadevos Avetisyan expressed confidence that there is a full opportunity for sustainable development in Armenia without giving up the homeland.

“The role and participation of the state in this issue must become key. It needs to be literate, but never ordinary, indifferent, irresponsible,” he said.

“Armenia will again have a foreign policy, which it has not had in the last four years,” RPA member Artak Zakaryan stated in his speech.

He stressed that an accurate, balanced, and targeted foreign policy is the main guarantor of our security, lasting peace, our stability, prosperity, independence, national dignity and the realization of all the rights of our people.

The representative of the ARF Supreme Body of Armenia, NA Vice President Ishkhan Saghatelyan stated that the main goal of the “Resistance” movement is to have a strong Armenia.

“In order to achieve that, there is a necessary condition – to remove Nikol, because a strong, secure, prosperous Armenia is not possible with him. The mission of the “Resistance” movement will not end with the removal of Nikol. After removing him, the ideas of the movement and its goals must become the functions of the state, that is, the next government must be able to resist and overcome all the challenges and threats that our country has faced. For that, it is necessary to build a new quality state with effective governance, a strong economy and a strong army. We can do it together,” he said.

He then invited the protesters to a march.

The participants of the Resistance march stopped near the residence of the RA President.

The march also stopped at the intersection of Proshyan and Demirchyan streets, near Pashinyan’s government mansion. Speaking on behalf of the participants of the march, the representative of the movement Hayk Derdzyan said, “After removing Nikol Pashinyan, we will turn his government house into a treatment platform for our soldiers. The government house must serve the people.”

The march reached “France” Square, where the rally continued.

The representative of the ARF Supreme Body Ishkhan Saghatelyan made a speech .

“Once and for all today, we put an end to all the talk that the movement may take a step back, people may get tired. We will bring this struggle to a victorious end with decisive, calculated steps. Artsakh will never be part of Azerbaijan, the traitors will be removed,” he said.

Presenting the work done during the past week, he mentioned that they have set up security and defense committees, socio-economic task forces with international organizations, and political committees.

According to Ishkhan Saghatelyan, the works of creating “Resistance” centers in the regions will start on Monday.

He also said that every Wednesday at 19:30, in the square of France, the leaders of the movement will meet with the citizens to hear their opinions and suggestions.

The actions will continue next week, the next rally will take place on June 24, at 19:30 in France Square.