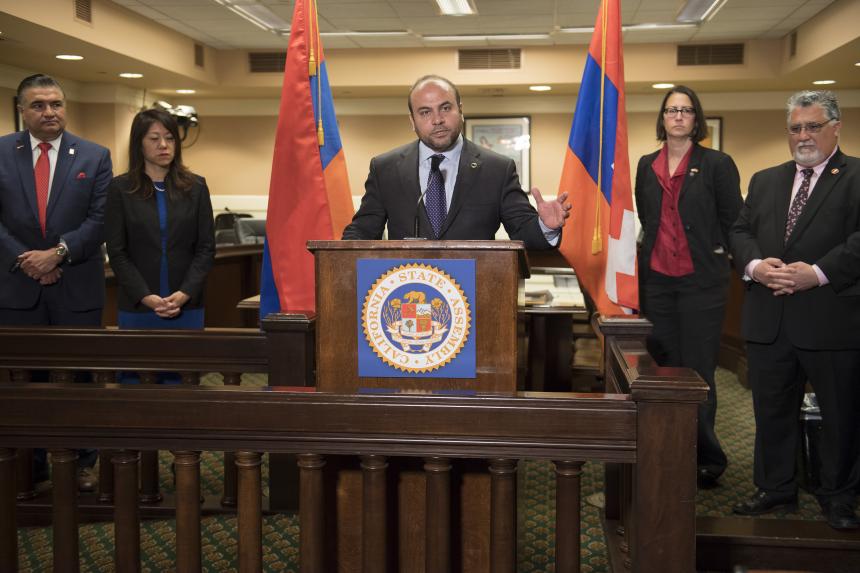 The bill mandates that every year on April 24, all community colleges and public schools throughout California will close. State employees will be given time off with pay.

The text further states that on April 24 or on an alternate date “public schools and educational institutions throughout this state may include exercises, funded through existing resources, remembering and honoring the many contributions that survivors of genocide have made to this country. The State Board of Education may adopt a model curriculum guide to be available for use by public schools for exercises related to Genocide Remembrance Day.”

The State Assembly and Senate members worked tirelessly for months to have both Chambers of the California legislature adopt this bill. The odyssey started on February 7, 2022 when it was introduced in the State Assembly. The bill passed through several committees: Governmental Organization: 20 yes, 0 no; Higher Education: 12 yes, 0 no; Appropriations: 12 yes, 0 no; and the full State Assembly on May 26, 2022 by a vote of 75 yes and 0 no.

The bill was then submitted to California Governor Gavin Newsom for his signature on August 31, 2022. I contacted the Governor’s office and was told that he has until September 30, 2022 to sign or veto the bill.

I spoke with the sponsor of the bill, Assemblyman Adrin Nazarian, and congratulated him on his great efforts to pass this historic bill.

Another close friend of the Armenian community, State Senator Anthony Portantino, sent me the following empathetic message: “Far too many Californian families have been tragically affected by genocide. It’s sadly something that has touched many cultures since the first genocide of the 20th Century was perpetrated against the Armenian people by the Ottoman Turks. While we learn about Native American conquest, the Holocaust and other horrific violence committed against humanity, in our schools we don’t currently have one day that speaks to all of these atrocities and brings people together to remember, to love and to care for one another across ethnic communities. One day out of 365 for grieving and healing purposes is appropriate and I was proud to support it.”

Meanwhile, Turkish denialists are lobbying against the bill, trying to convince Gov. Newsom not to sign it into law. The Assembly of Turkish American Associations (ATAA), a notorious genocide denialist organization, issued a statement on September 5, 2022 urging “the Turkish American community and friends of Turkey to send letters, faxes, and emails to Governor Newsom in order to urge him to veto” the Genocide Remembrance Day.

Here is what the ATAA urged its supporters to do: “Please communicate to Governor Newsom and his staff today and get your voice heard! Please copy/paste and send your sample letter using the email form link: Web contact form: https://govapps.gov.ca.gov/gov40mail. Please choose subject: AB01801\State holidays: Genocide Remembrance Day. Or send a letter to: The Honorable Gavin Newsom, Governor, State of California, 1021 O Street, Suite 9000, Sacramento, CA 95814.

To counter the Turkish denialist lobbying efforts, the Armenian community should inundate Gov. Newsom’s office with emails and letters, using the above provided contacts, urging him to sign AB 1801 into law. Act quickly, because the Governor will make his decision between now and Sept. 30.

Let us see who has the stronger voice in California: The large Armenian community numbering hundreds of thousands or a few Turks who want to export to California the Turkish government’s denial of the Armenian Genocide?