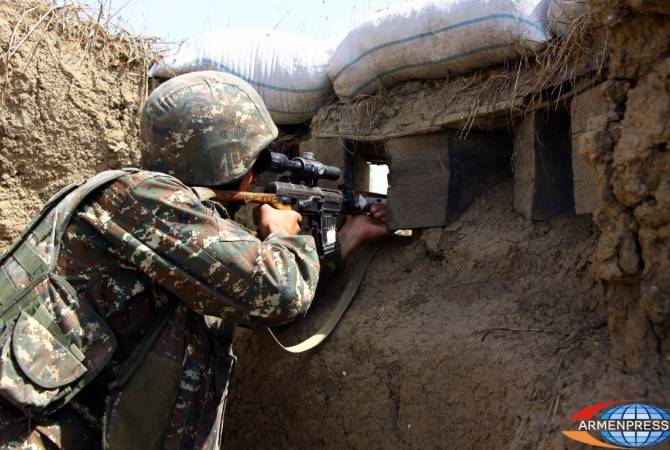 The Armenian military said early on Tuesday that Azerbaijani forces are using artillery, combat drones and automatic weapons to strike its positions along various sections of Armenia’s border with Azerbaijan.

The Defense Ministry in Yerevan said that the “intensive” shelling began shortly after midnight.

“The exchange of intensive gunfire is continuing,” the ministry spokesman, Aram Torosian, said an hour later.

In another update, Torosian said that the fighting continued unabated as of 4 a.m. local time. “The Armenian armed forces are giving [the enemy] an adequate response and fully accomplishing combat tasks set for them,” he said.

Torosian added that they suffered casualties but did not give any numbers. He also said that “in some directions” Azerbaijani troops are trying to advance towards Armenian territory.

Residents of several Armenian border communities told RFE/RL’s Armenian Service that they are hearing powerful explosions and gunfire. The mayor of, Verin Shorzha, a border village in eastern Gegharkunik province spoke of “intensive gunfire” coming from Azerbaijani army positions across the local section of the long border.

According to a former local government official, several shells landed in another Gegharkunik community, Sotk, forcing some parents to evacuate their children to safer locations.

Another, serving Gegharkunik official was quoted by news.am as saying that some residents of the nearby village of Norabak are fleeing their homes.

The fighting also affected communities in Armenia’s southeastern Syunik province. In the local village of Karashen, an Azerbaijani shell hit a wedding hall, eyewitnesses said, adding that nobody was hurt as a result.

Meanwhile, Azerbaijan’s Defense Ministry accused the Armenian side of launching a “large-scale provocation” along three border districts in western Azerbaijan.

In a statement, the ministry claimed that Armenian commando units crossed those border sections to try to put landmines near Azerbaijani army posts there. The Azerbaijani side, it said, hit Armenian military infrastructure and took other “urgent measures” in response to those raids.

Torosian, the Armenian Defense Ministry spokesman, flatly denied those claims, insisting that the fighting was initiated by “Azerbaijan’s military-political leadership.” He said that the Azerbaijani military laid the “information groundwork” for it in recent days.

Yerevan dismissed those claims as “disinformation.” Some Armenian commentators suggested that Baku may be preparing the ground for another escalation in the Nagorno-Karabakh conflict zone.