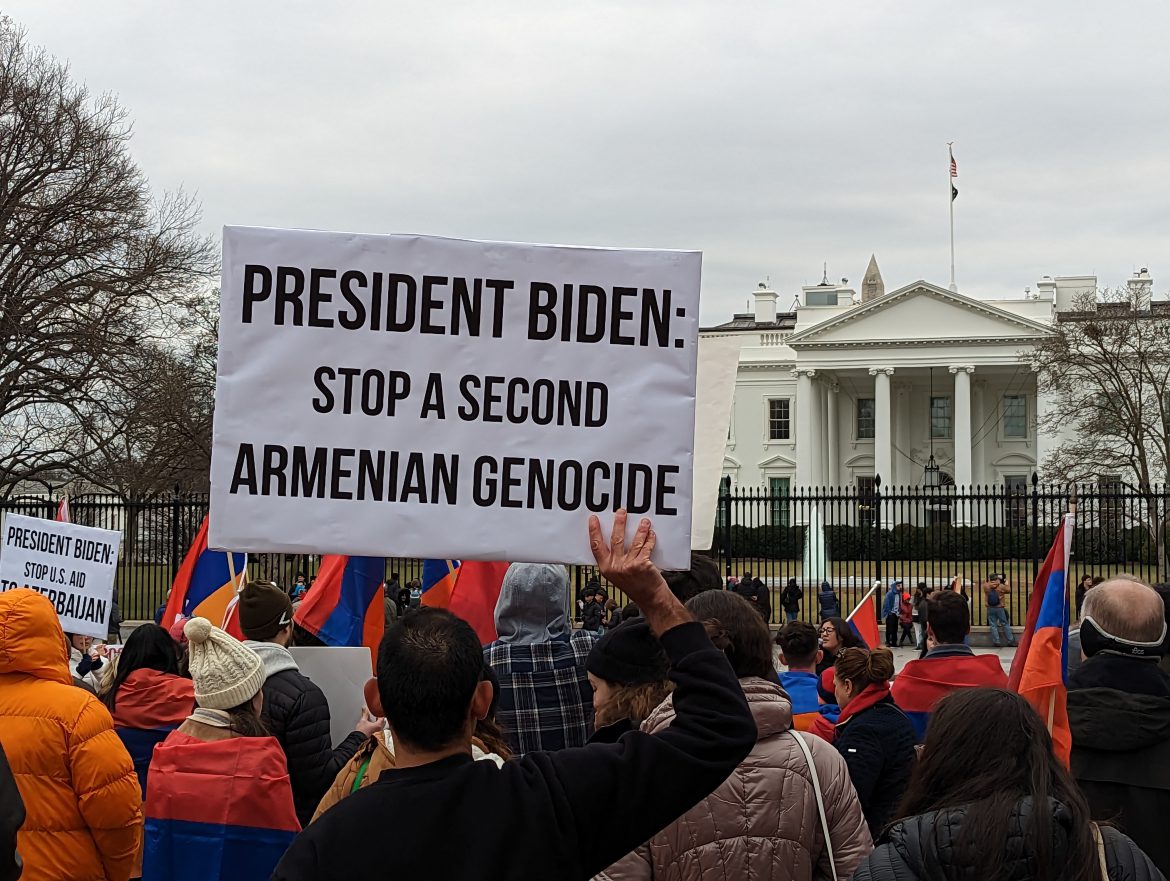 WASHINGTON, DC — On Saturday afternoon, the Armenian Youth Federation – Youth Organization of the Armenian Revolutionary Federation (AYF-YOARF) Washington DC “Ani” Chapter organized a community protest in front of the White House, demanding that President Joe Biden and his administration take action against Azerbaijan for its relentless, inhumane blockade of Artsakh.

Over 100 Armenian community members and allies gathered in the early afternoon, holding US, Artsakh, and Armenian flags as well as informational posters distributed by chapter members. The protest began with remarks by AYF DC “Ani” Chapter Chair Nayiri Shahnazarian.

“Thank you all for being here today to stand shoulder-to-shoulder with the people of Artsakh in this time of crisis,” Shahnazarian said. The protest marked the 41st day of the Artsakh blockade, which has isolated 120,000 people and has barred their access to food, vital medicines, internet, gas and electricity. “We are here today in front of the White House not only to spread awareness of these atrocities, but also to demand that our government — the Biden Administration — pressure Azerbaijan to end the blockade, stop all military aid to Azerbaijan, sanction Azerbaijan for their war crimes, and provide emergency aid to Artsakh,” Shahnazarian continued. She then led the community into chants condemning the aggressive actions taken by Azerbaijan and its dictator, Ilham Aliyev, and calling for swift action from the Biden Administration.

In attendance were several Armenians who had traveled from distant hometowns to support this initiative. Among them was prospective AYF member Evan Aronow, who drove by himself from the Philadelphia area. “I was happy to see Armenians coming out to stand in solidarity with Artsakh, especially to demand that the United States cease its military aid to the bloodthirsty Azeri regime,” he said. “I’m happy to see so many young Armenians care about our homeland, because the reality is clear. We are fighting the same struggle for survival as our ancestors.”

Matthew Girardi, a member of the AYF DC “Ani” Chapter, delivered heartfelt remarks on the role of both Americans and diasporan Armenians in the current humanitarian crisis. “The history of the Armenian people is not one of ease or comfort. But lest we forget — through empires that rose and fell, through our trauma and heartbreak, through our battles fought and lost — ours is not the story of a people who perished. Ours is the history of a people who survived,” Girardi said. “So, when the dust has settled, let it be known that when the call came, we answered,” he continued. “Let us be great Americans. Let us be great Armenians. Let us remember how futures are built.”

Chanting resumed between speakers’ remarks with renewed vigor, and those passing by on the street stopped to listen to the pleas: “End the cycle of genocide,” “Break the blockade,” and “Stop a second Armenian Genocide.”

AYF-YOARF ER Central Executive member Areni Margossian, who is also a member of the AYF DC “Ani” chapter, took to the microphone to ask “What will it take? What will it take for you, President Biden, to act against this critical humanitarian crisis before it unfolds into even greater atrocities?” Margossian then urged the audience to “channel pain into action” and commit themselves to continuing to fight for Artsakh. “We are all we have, and that is a lot. Artsakh is Armenia, [it] will always be Armenia, and we remain unwavering in our commitment to a free, independent, and united Armenia,” she concluded.

The protest ended with closing remarks by Shahnazarian. “Keep up the pressure on Congress and [on] the Biden Administration,” she cautioned, “until our brothers and sisters [can] break free from this blockade.” Shahnazarian concluded by urging protesters to channel their efforts into tangible steps by visiting the Armenian National Committee of America (ANCA) website, anca.org/blockade. The next protest in the DC area will be at the US Capitol on Thursday, February 2 at 1 pm, which coincides with the pro-Artsakh advocacy days organized by the ANCA Eastern Region.