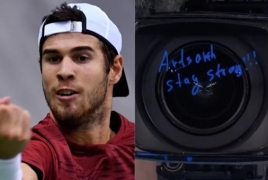 Armenian-Russian tennis player Karen Khachanov, after reaching the 1/8 finals of the Australian Open, expressed his support for the Republic of Artsakh (Nagorno-Karabakh), which has been under blockade for over 40 days now.

Since December 12, the sole road connecting Nagorno Karabakh to Armenia – the Lachin Corridor – has been blocked by self-described Azerbaijani environmentalists. Karabakh residents have reported food and fuel shortages, while hospital patients don’t have access to essential medicines, with only a handful allowed transfer to facilities in Armenia proper.