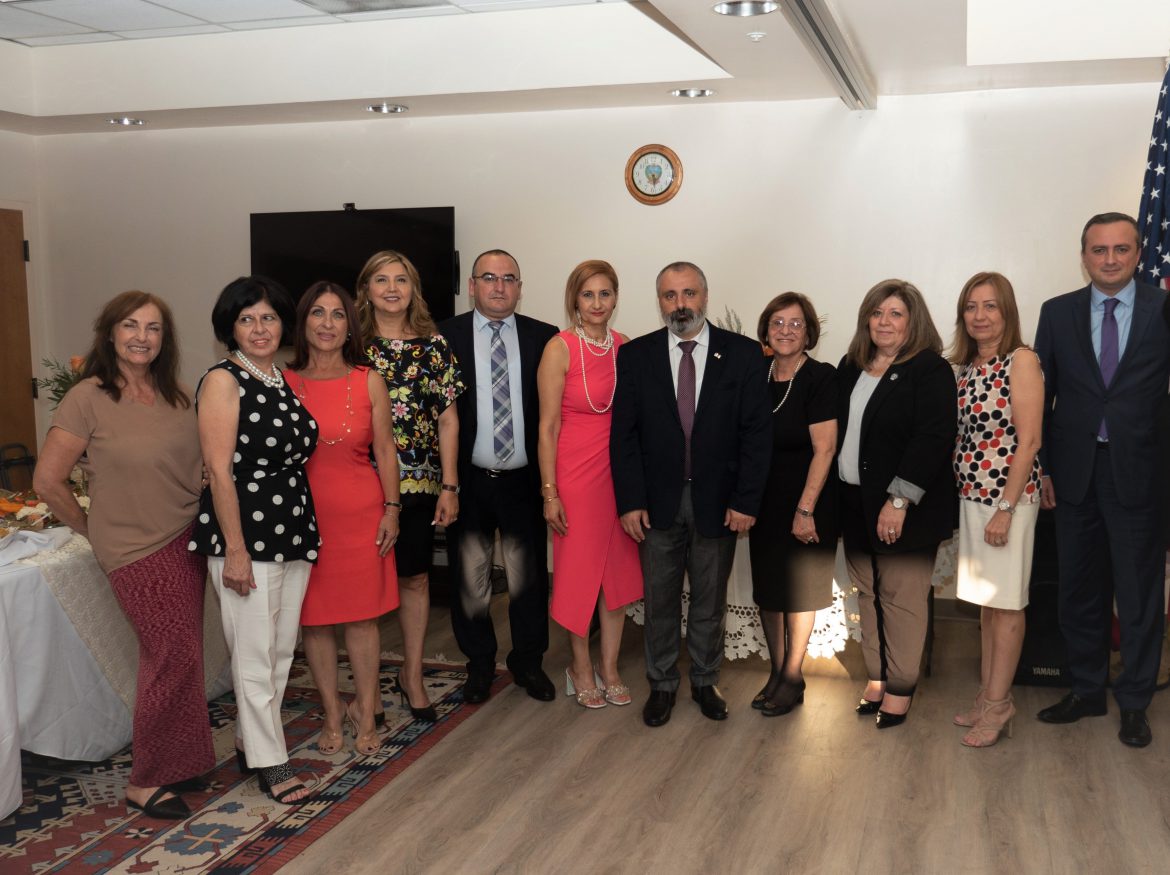 Glendale, CA – Coinciding with the two-year anniversary of Azerbaijan’s launch of a 44-day war on Artsakh, the Armenian Relief Society of Western USA, Regional Executive Board hosted a meeting with Foreign Minister of Artsakh David Babayan on September 27, 2022, at the ARS Regional Headquarters.

Opening remarks were delivered by ARS Regional Executive Board Chairperson Vicky Marashlian, who first requested for attendees to observe a moment of silence in memory of all the fallen Armenian heroes, who have valiantly sacrificed their precious lives in defense of our homeland. Thereafter, Marashlian welcomed the delegation and stressed that the alarming situation in Artsakh is of utmost concern. She also placed emphasis on the wide-ranging humanitarian programs of the Armenian Relief Society and the region, in particular, centering on emergency and relief efforts in Artsakh, including support of wounded soldiers, displaced families, children of fallen heroes, fundraising efforts, shipments of essential aid, and more. Marashlian highlighted two recent projects the ARS of Western USA has sponsored, including the renovation of the third floor of the Heratsi Hospital’s Military Disability Rehabilitation Center in Yerevan, as well as the ARS Solar Water Heater Project in Artsakh to install solar water heaters for residential use.

Foreign Minister of Artsakh David Babayan brought immediate attention to the existential crisis faced by Armenians as a result of the continuous attacks and aggression by Azerbaijan, and also touched on the regional implications of losing Artsakh. He stressed the importance of making Artsakh a central idea with constant emphasis placed on it throughout community efforts and that our primary attention turns to it given the fact that we are currently living through critical and historical times. “Artsakh is wounded, but will always remain,” he stated. He asserted that its extreme vulnerability makes it imperative for Armenians throughout Armenia, Artsakh, and the Diaspora to unite, highlight the importance of Artsakh in their everyday efforts, and raise awareness. Regardless of the monumental challenges faced, he explained that every Armenian can play a role in these efforts, be they in the homeland or in the Diaspora, given the utmost value that Artsakh holds for the Armenian people.

A question-answer period followed remarks, whereby ARS members were able to present their inquiries to the Foreign Minister about the current situation in Artsakh and the war’s aftermath.

The official meeting concluded with Chairperson Vicky Marashlian presenting Mr. Babayan with a coin featuring the ARS logo on one side and the coat of arms of the Republic of Artsakh on the other. Marashlian reaffirmed that the Armenian Relief Society will continue to stand in solidarity with Artsakh and remains committed to advancing its humanitarian programs in service of the people. Thereafter, Mr. Babayan presented the ARS with a hand-woven carpet of Artsakh.

The delegation and ARS members spent the final part of the evening together during a reception hosted by the ARS Regional Executive Board.