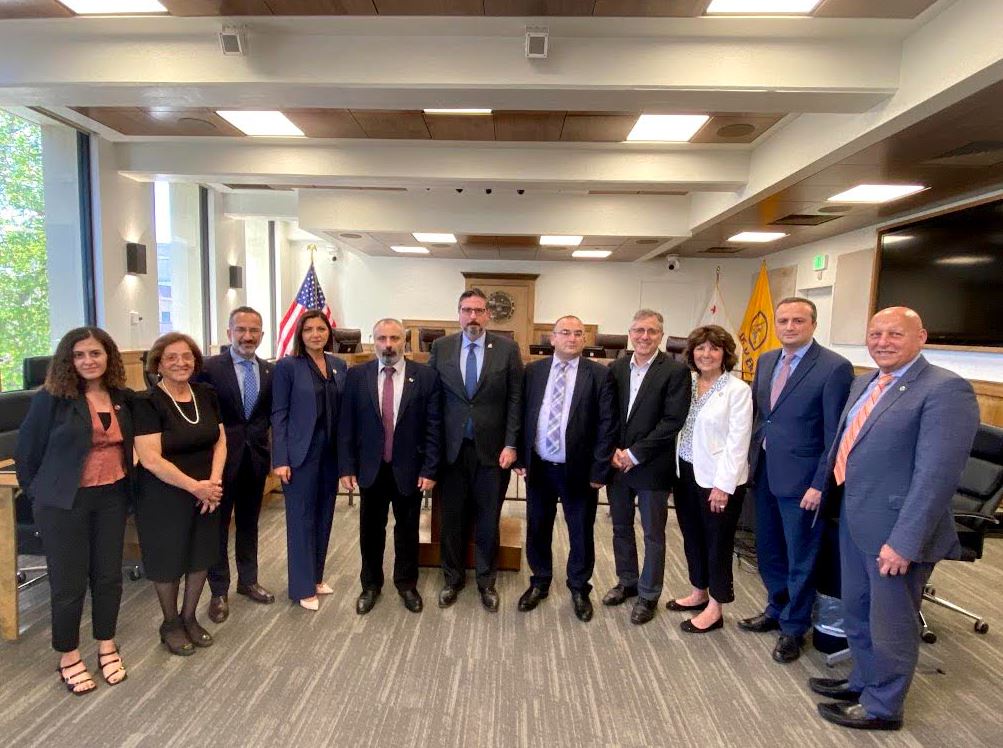 GLENDALE, CA – On September 28th, the Glendale City Council signed an agreement establishing a sister-city relationship between Glendale and Martuni, Artsakh in the presence of the Foreign Minister of Artsakh, His Excellency Dr. David Babayan, currently in the United States on a working visit, reported the Armenian National Committee of America – Glendale (ANCA-Glendale).

The Glendale-Martuni Sister-City Agreement was introduced by Mayor Ardashes Kassakhian and seconded by Councilmember Ara Najarian, passing with unanimous support on August 23rd, 2022.

“Glendale City Council is proud to stand firmly in solidarity with the people of Armenia and Artsakh amidst Azerbaijan’s unprovoked assault on Armenia,” remarked Mayor Ardashes Kassakhian. “With the signing of the Glendale-Martuni Sister City agreement, in the presence of Artsakh’s Foreign Minister David Babayan, we express our commitment to the right to self-determination for the Armenians of Artsakh, and state in no uncertain terms that Azerbaijan must be held accountable for its unabated aggression against the Armenian people – and urge the U.S. to take immediate steps to condemn Azerbaijan’s aggression, enforce restrictions on military aid to Baku, and provide urgent humanitarian relief to the at-risk Armenian population of Artsakh as they face a threat to their very existence.”

In order to foster ties between the two cities, the ANCA Glendale chapter announced the launch of the Glendale-Martuni Sister City Association – to facilitate cultural, educational, and humanitarian exchanges between Glendale and Martuni.

“By signing this agreement in the presence of Artsakh’s Foreign Minister David Babayan, Glendale City Council sends a powerful message of solidarity and hope to the Armenians of Artsakh – who continue to face a dire threat to their very existence,” remarked ANCA Glendale Chair Lucy Petrosian. “By launching the Glendale-Martuni Sister City Association, we look forward to working with a broad cross-section of Glendale’s Armenian community to build bridges with our compatriots in Martuni, and provide assistance and support to those in need.” she concluded.

Foreign Minister David Babayan has been in the United States as part of a working visit with Deputy Minister for Education, Science, Culture and Sports, Lernik Hovhannisyan. Last week, the delegation was hosted by the Armenian National Committee of America (ANCA) in Washington, DC where they participated in policy roundtables, think tank events, academic discussions, and Congressional meetings to convey the priorities and concerns of the Armenians of Artsakh amidst Azerbaijan’s unabated aggression.

“In light of Azerbaijan’s brazen, unprovoked attack on the sovereign territory of the Republic of Armenia beginning September 13th, it is entirely unacceptable for the United States to continue funding the Aliyev regime’s military,” remarked ANCA National Board member and Glendale resident Zanku Armenian. “The U.S. must send a clear, unequivocal message that this type of authoritarian expansionism will not be tolerated, and immediately put an end to U.S. military assistance to Azerbaijan – which has emboldened and enriched this aggressive regime for decades,” Armenian concluded.

Azerbaijan’s latest assault on the Republic of Armenia resulted in the deaths of over 200 Armenian soldiers, 4 Armenian civilians, and the forced displacement of over 7,000 residents. As a result of the incursion, Azerbaijan now occupies an additional 10 square kilometers of Armenia’s sovereign territory and has taken at least a dozen Armenians prisoner – who have suffered torture, mutilation, and execution at the hands of Azerbaijani soldiers.

ANCA Glendale advocates for the social, economic, cultural, and political rights of the city’s Armenian American community and promotes increased civic participation at the grassroots and public policy levels.