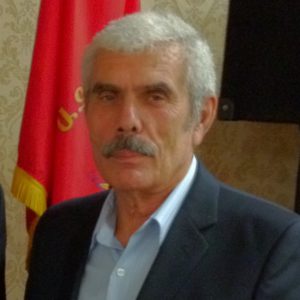 Dear members and relatives of the Aslanian Family, dear comrades,

We are gathered to say farewell to our industrious comrade Khosrov, ARF member Khosrov, but we know very well that Khosrov and others like him will not leave us forever, but will stay with us with the honorable merit of their lives and the memory of being a man of the ARF.

This is a difficult time because we are saying farewell to a comrade who was a believer and a lifelong servant. This moment also contains a sacrament, because I have a duty to talk about a comrade who lived and did all his work in a serious manner, kept himself away from the spotlight and public noise, believing that this is how a loyal ARF member should work. He was well aware of the idea of ​​one of the founders of the ARF that work is important for the ARF member and that if the ARF member spoke too much, he would not have time to act.

Unger Khosrov lived a full life, in the most meaningful sense of the word. He became the father of a family, a teacher, a poet, a cultural figure, but in addition to all this, he did the “Lion’s share” of his work relentlessly under the banner of the Armenian Revolutionary Federation.

Khosrov Aslanian, who adopted the Asoyan pen, grew up with the ideas of the ARF during his childhood and adolescence, starting with his student days in Gamishli. His first educators were teachers who believed in the work, ideas and vision of the ARF. Later, when he settled in Beirut and joined the ARF, in parallel with the Zavarian Student Union, he held the position of teacher, and with the torch passed to him by his educators, he also ignited the minds and souls of his students.

During his student union days, and after joining the A.R.F. family in his hometown, he assumed responsible administrative positions. The Lebanese civil war broke out and he enlisted in the defense of our Armenian regions, and was at the forefront of defending Armenian institutions and neighborhoods in the West and East. These were the days when the defenders of our collective, holding their lives and souls in their hands every day, resisted large and small encroachments, bombs and missiles, and continued their work, when young lives were extinguished on the dam next to them.

Later, when he moved to the United States and settled in our region, he continued his ARF services. He had a family and children, but his ARF home remained just as dear to him and he received the same gratification from his work. He was elected a member and representative of the Rostom Gomideh, was elected a member of the Central Committee, and assumed many other responsibilities. Wherever he acted, whatever happened in his body, he acted silently, without the slightest effort to attract attention to himself, because, as I said, he was a man who believed in silent and consistent work, he did not seek glory and praise. He acted modestly, and did not just make a modest impact but an enourmous impact.

Ungre Khosrov’s silent work also took him to Armenia and Artsakh, when the Armenian people were involved in the Artsakh liberation war about 30 years ago. Unger Khosrov, who in the past had contributed to the pursuit of the Armenian Cause, could not but take part in the Living Struggle, which was the liberation of Artsakh. He also fulfilled that mission in silence. Except for those in charge and a very small number of friends, no one knew or knew what he had done in Artsakh, but he returned with the satisfaction of serving the homeland, of being content to donate his drop into the sea of ​​our modern struggle. Later, when his volumes of poetry were published, readers learned somewhat about what bitter and respectworthy experiences he had experienced on the heights of the homeland, especially because of the martyrdom of his comrades-in-arms. His pen was always filled with ink until the last days of his life during the ARF struggle.

The state authorities of Artsakh did not forget the services rendered by unger Khosrov and years later, they honored him with a special order. Even then in line with his modest character, he kept it away from the spotlight. The devoted Khosrov received that honor modestly and with emotion.

Dear Unger Khosrov, I am sure that you will forgive me when I say goodbye at this moment, so I will talk in some detail about the deeds and services of a man of the A.R.F. Do not condemn me, for we all know how humble and silent you were about your work. At the cost of repetition, your life has been a dedication and service to your twin families, your own family and the ARF family, as well as to the mother family of us all, Armenia and Artsakh, which have taken a large place in your recent volumes.

Goodbye, dear friend! You, too, join the ranks of the ARF Dashnaktsutyun, who acted silently, lived with pain and pride in the Homeland and the nation. And following the words of our immortal poets, we can say: O friend, you lived and worked for your nation, people and homeland, you lived a lot. You closed your eyes in silence and tomorrow you will go to join our homeland, which will be proud to have a child like you.

Job well done, unger Khosrov. We will keep your memory immortal and exemplary.

On behalf of the Central Committee of the A.R.F. Western United States of America, the Rostom Committee, and all the ungers in our region, I extend my condolences to Mrs. Rita, your children Dikran, Shogher, and Patil, your loved ones, and all of you, dear mourners.