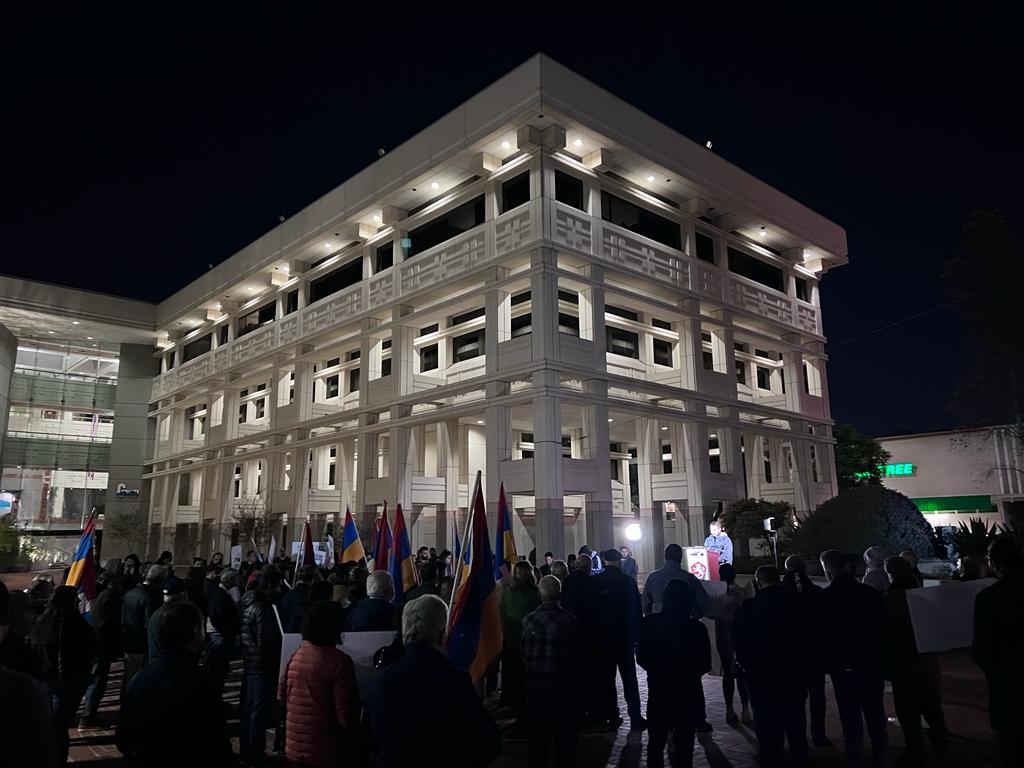 “With Artsakh, for Artsakh”

With this call to action, Armenians-Americans from all over Los Angeles gathered Wednesday evening, November 9, at Glendale City Hall’s Perkins Plaza , first to honor the memory of those who died during the 44-day Artsakh war and at the same time to express their solidarity with the Artsakh Republic and Artsakh’s Armenians.

At the beginning of the event, master of ceremonies Shant Sassounian asked attendees to observe a moment of silence in memory of those who died during the 44-day Artsakh war, after which the national anthems of the Republics of Armenia and Artsakh were performed by Tro Krikorian.

Then, Glendale City Mayor Ardy Kassakhian was invited to the podium to address the attendees. Kassakhian spoke about current difficult conditions of Artsakh and the imperative of supporting Artsakh’s Armenians.

In the next part of the event, Jibid Melkonian read the statement of the AYF Western U.S. Executive Board in Armenian and English.

Archpriest Komitas Torosian, who was participating in the event on behalf of the Western Prelacy, was then invited to the stage. Noting in his speech that Artsakh has never been a part of Azerbaijan and will never be, the reverend father invited the audience to pray for peace and for the souls of the victims of the Artsakh war.

Continuing the unity event, Vicky Marashlian, the chairperson of the Armenian Relief Society WUSA delivered the remarks on behalf of the ARS WUSA’s Executive Board.

In her speech, Marashlian specifically referred to the projects implemented in Artsakh through the ARS and emphasized the need to support Artsakh’s Armenians, reiterating that the assistance provided to Artsakh by the ARS and the implemented projects will continue in the same way.

ARF WUSA Central Committee Member Hovig Saliba was then invited to the stage. In his speech, he praised the participation of the attendees and touched on the importance of unity, adding that this unity will be formed around three important factors, which are the continued demands for justice for the the Armenian Genocide, the strengthening of Armenian statehood and support for the Artsakh liberation struggle.

Saliba also announced that a statement was prepared on behalf of the organizers of the rally and expressed hope that any community organizations who were absent from the Unity Rally would also join that statement. The statement is presented in its entirety at the end of this article.

To conclude the unity rally, attendees lit candles and honored the memory of all those who paid the ultimate sacrifice for the liberation of Artsakh, especially the heroes who fell during the 44-day war.