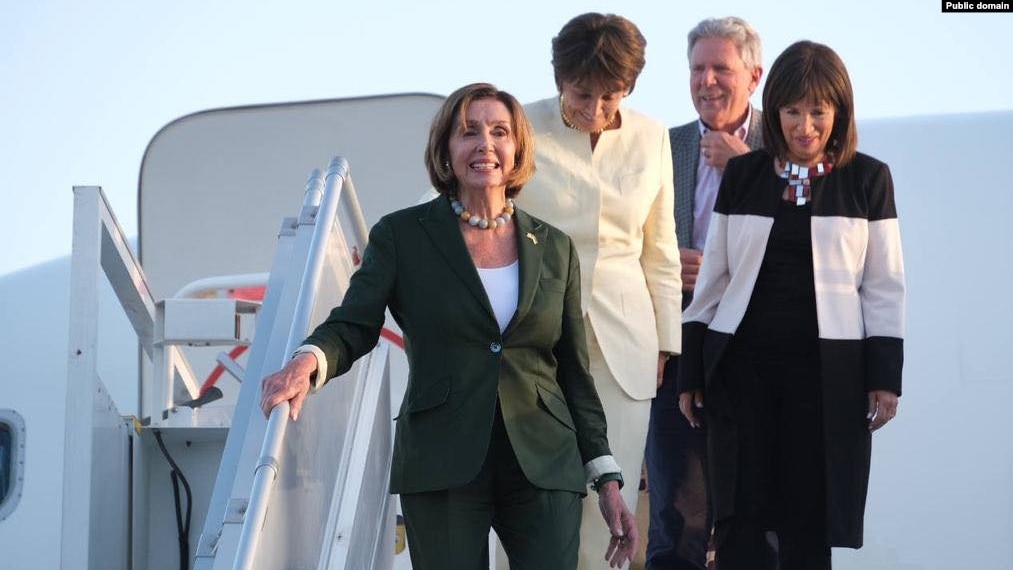 YEREVAN, ARMENIA – (RFERL) Nancy Pelosi, the speaker of the U.S. House of Representatives, arrived in the Armenian capital on September 17 after the worst fighting in two years between Armenia and Azerbaijan left more than 200 dead.

The U.S. Embassy said Pelosi’s visit was the first to the South Caucasus nation for the California Democrat.

She is also the highest-ranking U.S. official to visit Armenia since the former Soviet republic’s independence in 1991.

Representative Jackie Speier, also a California Democrat and who is of Armenian descent, accompanied Pelosi on the three-day trip.

Shortly after her arrival, Pelosi wrote on social media: “For generations we have protected and preserved their choice. From the United States to Ukraine, Taiwan, Armenia, the world faces a choice between democracy and self-government, and we must choose democracy again.”

Pelosi’s California constituency is home to a large number of Armenian-Americans. The veteran lawmaker has long backed causes championed by the Armenian community in the United States.

Pelosi said the trip was planned before the recent escalation of violence on the Armenian-Azerbaijani border.

The clashes that erupted on September 13 — the worst since the two sides fought a war in 2020 — ended “thanks to international involvement” overnight on September 15, Armenia’s Security Council said after earlier failed attempts by Russia to broker a truce.

Armenian Prime Minister Nikol Pashinian on September 16 said that the death toll from the week’s clashes with Azerbaijan had risen to at least 135.

“Unfortunately, it is not the final figure. There are also many wounded,” he told a cabinet meeting.

Azerbaijan’s Defense Ministry on September 15 said 71 of its servicemen had been killed during the clashes.

Both sides have blamed each other for starting the most recent hostilities, with Armenia accusing Azerbaijan of an unprovoked attack that reached into Armenian territory and Baku saying it was responding to shelling by Armenian forces.

Before the cease-fire was announced, Pashinian said Azerbaijani forces had struck and seized several Armenian settlements along their shared border and in territory beyond Nagorno-Karabakh. Baku said it was responding to “provocations” by the Armenian side.

Baku and Yerevan have been locked in a conflict over Nagorno-Karabakh for years. Armenian-backed separatists seized the mainly Armenian-populated region from Azerbaijan during a war in the early 1990s that killed some 30,000 people.

The two sides fought another war that lasted six weeks in late 2020 and killed an estimated 6,000 people before a Russia-brokered cease-fire, resulting in Armenia losing control over parts of the region and seven adjacent districts.

Under the cease-fire, Moscow deployed about 2,000 troops to the region to serve as peacekeepers. Russia moved quickly to negotiate an end to the latest hostilities, but a renewal of the cease-fire has failed to hold.