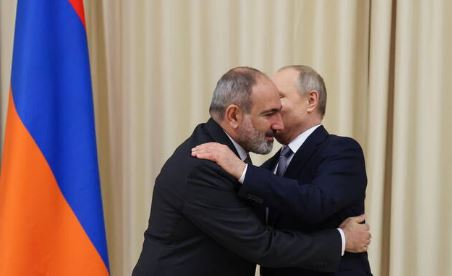 Russian President Vladimir Putin and Armenian Prime Minister Nikol Pashinian again pledged to further deepen relations between their countries when they held their fourth phone call in a month on Monday.

Putin and Pashinian congratulated each other on the 25th anniversary of the signing of a Russian-Armenian treaty on “friendship, cooperation and mutual assistance.”

According to the Kremlin, the two leaders reaffirmed their “mutual intention to further strengthen allied ties between Russia and Armenia.”

The Armenian government likewise said they expressed confidence that bilateral ties “will continue to grow stronger in various areas.”

Putin and Pashinian already pledged to reinforce the “privileged alliance” of Russia and Armenia in a joint declaration issued after their talks held outside Moscow in April. They said Moscow and Yerevan will seek to “jointly overcome the challenges” stemming from Western economic sanctions imposed after the Russian invasion of Ukraine.

“We sincerely value our friendship with fraternal Armenia and are determined to further strengthen the Russian-Armenian alliance for the sake of the prosperity of our countries and peoples,” the Russian Foreign Ministry said in a statement on the anniversary of the bilateral treaty.

Putin and Pashinian also discussed the Nagorno-Karabakh conflict. They specifically looked at “some practical aspects” of implementing Armenian-Azerbaijani agreements brokered by Moscow during and after the 2020 war in Karabakh, the Kremlin reported without elaborating.

The Karabakh issue topped the agenda of their three previous phone conversations that took place earlier in August.

The latest call came two days before Pashinian’s fresh meeting with Azerbaijani President Ilham Aliyev which will be hosted by European Council President Charles Michel in Brussels. Aliyev and Pashinian already held trilateral talks with Michel in April and May.

Moscow indicated recently that it is also trying to organize an Armenian-Azerbaijani summit. It has repeatedly denounced the EU’s mediation efforts, saying that they are part of the West’s attempts to hijack Armenian-Azerbaijani peace talks and use the Karabakh conflict in the standoff over Ukraine.

A senior EU diplomat insisted in June that the EU is not competing with Russia in its efforts to facilitate a “comprehensive settlement” of the Karabakh conflict.