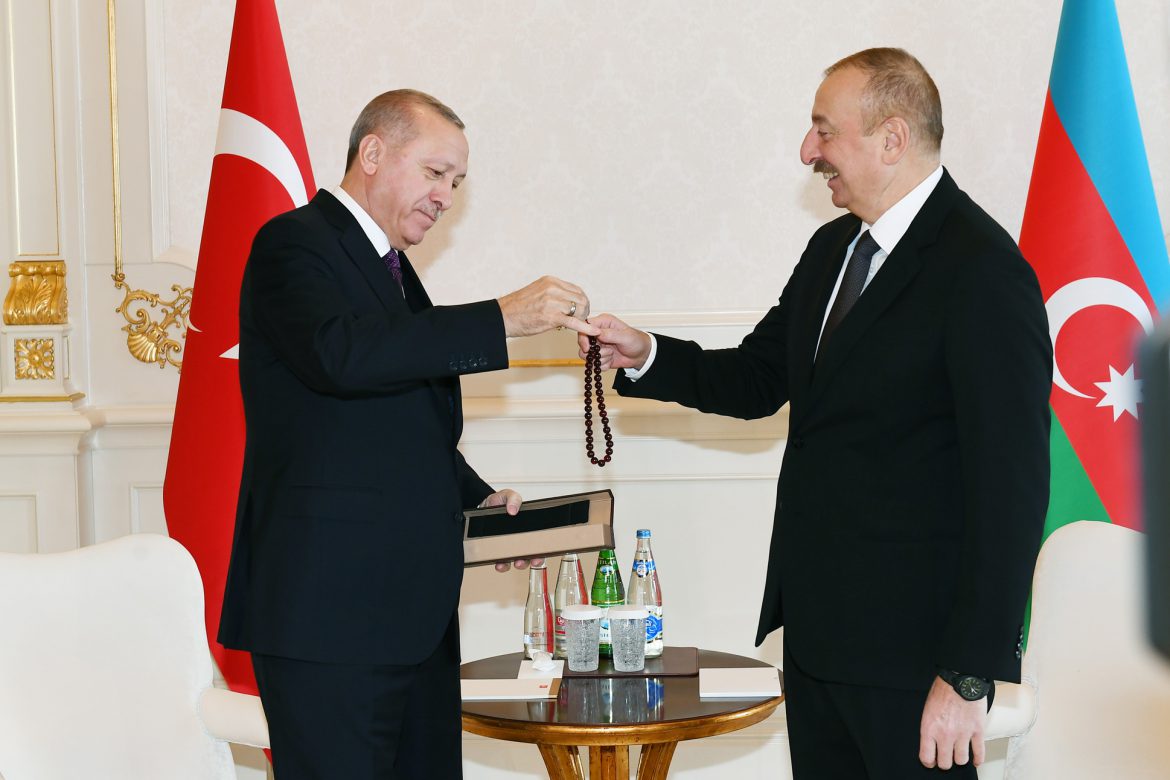 While Armenia has been licking its wounds of the 2020 Artsakh War, the presidents of Azerbaijan and Turkey wasted no time to get together and split with their families and cronies the loot they acquired after occupying the territories in and around Artsakh.

Azerbaijani journalist Ulkar Natiqqizi posted on the eurasianet.org website his investigative article on October 24, titled: “‘Brotherly’ Azerbaijan and Turkey build lucrative Karabakh business ties.” It reveals how the two presidents have divided among their family members and close associates what they plundered from Artsakh.

Natiqqizi wrote that “Companies close to President Recep Tayyip Erdogan have received at least hundreds of millions of dollars in contracts, particularly in the reconstruction of the territories in Karabakh that Azerbaijan retook in the war…. In one large new agricultural complex in the Zangilan region, members of Erdogan’s family are business partners with members of President Ilham Aliyev’s family.”

In October 2022, Erdogan and Aliyev together toured “Dost [Friend] Agropark, a $100 million project that will eventually employ 500 people raising up to 10,000 head of cattle.” The two presidents placed ‘Made in Karabakh’ labels on the packages of meat products from the cattle brought to the region by Dost Agropark.

Accompanying Erdogan was “Abdulkadir Karagoz, the owner of Dost Ziraat, the Turkish investor in Dost Agropark.” Karagoz is “a member of Erdogan’s family; he is married to Erdogan’s niece, the daughter of Erdogan’s brother Mustafa Erdogan.” Shortly after his 2016 marriage, when Erdogan’s family members joined his company, “Karagoz began winning conspicuous amounts of government contracts, in many of which his firm was the sole participant.”

President Aliyev’s official website stated that “office buildings, 5,200 square meters indoor and 113,000 square meters outdoor animal husbandry complexes, social facilities, café, cinema, recreation area, swimming pool, and buildings for service personnel were built in the first phase of the [Agropark] project. A total of 3,500 head of cattle were brought to the complex and production of tillage carried out. Harvesting of wheat and barley planted last year was completed with the participation of both presidents.”

One of Erdogan’s allies managing Agropark is Mehmet Zeki Tugrul, the company’s CEO, a former board member of the youth wing of Erdogan’s ruling Justice and Development Party.

“On the Azerbaijani side, the investor [in Agropark] is Pasha Investments, part of the Pasha Holding company that brings together all of the firms owned by the family of Aliyev’s wife who is Azerbaijan’s first vice president, Mehriban Aliyeva,” eurasianet revealed.

“Cengiz and Kalyon are two of what has become known as the ‘Gang of Five’ Turkish firms that have close links to Erdogan and the ruling party and which have been awarded most large government tenders during Erdogan’s rule.” The Turkish newspaper Cumhuriyet reported that within one year of his marriage, Erdogan’s cousin “Karagoz obtained a total of ten tenders from Istanbul Metropolitan Municipality companies and certain public companies.”

Natiqqizi reported that “Both Kalyon and Cengiz have been awarded lucrative contracts for work in Karabakh, …including the construction of roads and operation of three mines, particularly of gold and copper. Kalyon is constructing the Horadiz-Aghband railway line that is envisaged as part of the transport route connecting Azerbaijan’s exclave of Nakhichevan to the mainland via southern Armenia. That project is projected to cost over $180 million and to be completed in 2023.”

According to a second eurasianet article titled, “Turkish Firms Benefit from Azerbaijan’s Victory,” stated that “another company run by Mehmet Cengiz won a contract from Azerbaijan’s state water management company for the construction of a massive hydroelectric dam, the Organized Crime and Corruption Project reported. Following the award, a company controlled by Cengiz made a payment to an offshore company which in turn bought a luxury apartment in London, in which the son of the then-head of the water company lived.”

Furthermore, Kolin Insaat, another ‘Gang of Five’ company, “also has gotten a lucrative road construction contract in Karabakh, to build the ‘Victory Road’ to Shusha [Shushi] along with an Azerbaijani firm, Azvirt. Kolin also was involved in the establishment of a market (located on ‘Turkey-Azerbaijan Friendship Street’) in the village of Agali, where the first few Azerbaijanis to resettle in Karabakh have moved.”

Another major Turkish firm, Demiroren Holding, got in 2021 a 10-year contract to run Azerbaijan’s state lottery, and “signed a memorandum of understanding with Azerbaijan’s Ministry of Economy “to build a $40 million pharmaceutical plant.”

Natiqqizi reported that “In total, the Azerbaijani government has allocated nearly $2.9 billion for reconstruction and restoration projects in Karabakh. Data have not been published breaking down which countries’ companies get contracts, and other countries perceived to be friendly, including Italy, Israel, and the United Kingdom, also have gotten contracts. But Turkish firms appear to be the biggest winners of the contracts. There are roughly 30 Turkish companies operating in Karabakh, according to the Turkish embassy in Baku. ‘These companies have already invested $1 billion, and these investments will continue to grow,’ said Yakup Sefer, Turkey’s chief trade counsellor in Baku.”

Natiqqizi wrote that when an Italian journalist asked Pres. Aliyev about the prospects of Italian companies getting a piece of the action in Artsakh, Aliyev said that “Italy would be in second place—behind Turkey. ‘It is our neighbor and they have very prominent construction companies,’ he said of Turkey. ‘Because it is our ally and close friend.’”