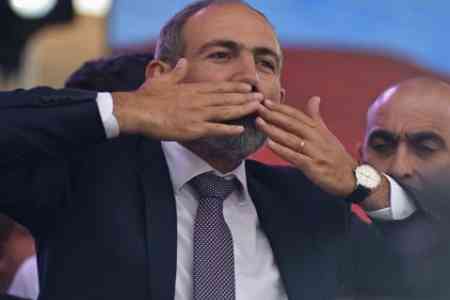 Breaking with a political tradition, the Armenian government has invited only pro-government parliamentarians to its annual New Year’s Reception that will be held at the presidential palace in Yerevan.

Lawmakers from the two opposition alliances represented in the National Assembly confirmed on Thursday that they have not received invitations from Prime Minister Nikol Pashinyan or President Vahagn Khachaturian.

“This shows their attitude towards the National Assembly, a political institution,” said Taguhi Tovmasian of the Pativ Unem alliance. “It means that the end of the year will be marked not in the Republic of Armenia but in Nikol’s republic.”

Tovmasian, who chairs the Armenian parliament’s standing committee on human rights, said that Pashinyan broke state protocol even though she and her opposition colleagues would have hardly attended the event.

“They think that this state is only the [ruling] Civil Contract party’s state,” said Lilit Galstian, a parliament deputy from the Hayastan alliance. “This testifies to their low political and human qualities. Once again they are proving that they are the founders of dividing lines in this country.”

“Never before has there been so much internal hatred, intolerance and division in Armenia,” Galstian told RFE/RL’s Armenian Service.

The government’s press office declined to comment on the snub. For its part, Khachaturian’s office denied responsibility for the choice of the reception guests, arguing that the event is organized by the government.

Khachaturian pledged to be “the president of all citizens” when he was sworn in March 2022 after being elected by the parliament. He has largely ceremonial powers.

Armenia’s former governments routinely invited all parliament members to their New Year’s receptions. Pashinyan also received such invitations when he was an outspoken opposition lawmaker from 2012-2018.

“When I was an opposition deputy [in the past] I even got birthday congratulations and flowers from the government and the president [Serzh Sarkisian,]” said Galstian.

Galstian had previously held a parliament seat from 2007-2012. Her Dashnaktsutyun party was in opposition to Sarkisian during most of that period.

Both Hayastan and Pativ Unem are highly critical of Pashinyan and his track record, having tried to topple him through street protests earlier this year.