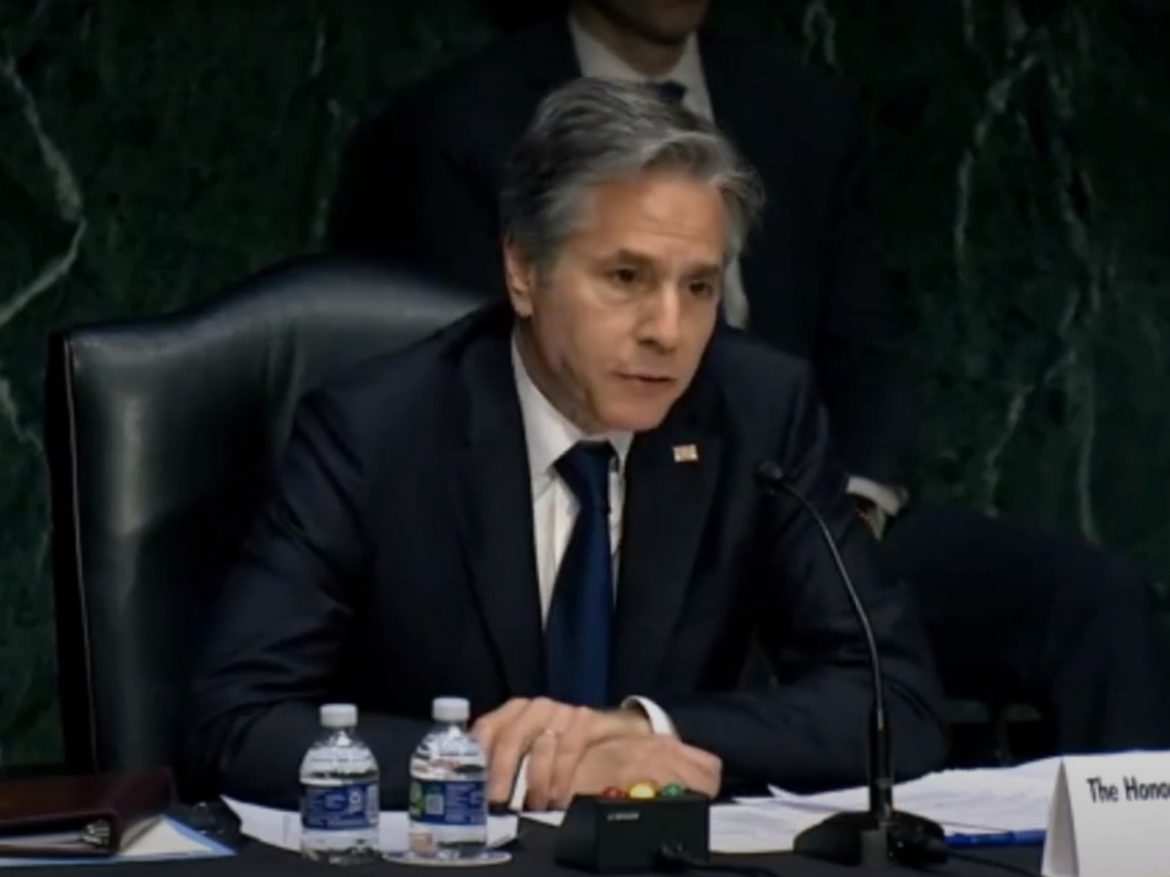 “Azerbaijan’s oil-rich, anti-Armenian Aliyev regime does not need and surely doesn’t deserve a single penny of U.S. taxpayer money,” said ANCA Executive Director Aram Hamparian. “We are grateful for the grilling of Secretary Blinken by Senator Menendez and Representative Sherman and Costa and echo their calls for an end to all U.S. arms and aid to Azerbaijan.”

During the Senate Foreign Relations Committee hearing, Chairman Menendez referenced the Government Accountability Office report that found that the State Department failed to properly report on the impact of the waiver of Section 907 restrictions on the military balance between Armenia and Artsakh.  “I look at this budget now and I see a $1.4 million discrepancy between the support for Armenia and Azerbaijan. I see what the Azerbaijanis are doing in Nagorno-Karabakh, including trying to eradicate the presence of Armenians who have lived there. How is it that we’re going to provide more money – which in my mind is in violation, but forgetting about the waiver, is in direct violation of section907? That’s not something I’m going to support, just to have you know.”

Blinken responded, saying, “907 is, as you know, an annual decision. We have an interagency review going on and that review is underway, but I take what you say seriously and I’ll take a look at that.”  He continued to note that he has been “very actively and directly engaged with leadership in both Armenia and Azerbaijan, including just as recently as a week ago phone calls with Prime Minister Pashinyan and with President Aliyev as well as their foreign ministers trying to help advance the prospects for a long term political settlement with regard to Nagorno-Karabakh. We have been developing and promoting various confidence-building measures.”  In a surprising departure from the standard U.S. policy of false parity on Azerbaijani aggression, Secretary Blinken noted, “we’ve been trying to push back on any unilateral actions, particularly by Azerbaijan that would only inflame the situation.”

During the House Foreign Affairs Committee hearing, Rep. Brad Sherman asked: “Should the Administration not waive Section 907, at least until the POWs are released and those of Armenian ethnicity are able to go back to their homes from which they’ve been cleansed?”  Secretary Blinken responded that the Biden Administration is “working very assiduously” to secure the release of POWs from Azerbaijan.  “Second, 907 is, as it is annually, under review. And as soon as we have the results of that review, obviously we’ll make those known to you.”  Rep. Sherman again urged Secretary Blinken not to waive Section 907.

Rep. Costa pressed Secretary Blinken on U.S. aid levels to Artsakh.  “The situation with Armenia and Azerbaijan has been very frustrating. And I don’t believe Azerbaijan has lived up to their agreements, and certainly we’ve learned a lot of things in the last few months, but Russia clearly is not good at keeping their word with the war criminal who is heading the country today.  What can we expect for additional support for Armenia and trying to hold Azerbaijan to the commitments they made in the truce settlement?”  Secretary Blinken, reiterated his outreach to President Aliyev and Prime Minister Pashinyan, “trying first of all to make sure that no one takes any steps that would potentially revert to conflict, but also to try to advance and support a long term political settlement.”  When he referenced the $2 million allocation for Artsakh demining, Rep. Costa promptly replied, “we need to do more.”

Similar to his budget request for FY2022, the President’s FY2023 budget includes $23,405,000 in foreign aid and $600,000 in military assistance to Armenia. A separate line item in the budget calls for $6,050,000 in International Narcotics and Law Enforcement spending in Armenia. Following broad-based Congressional outreach by the ANCA and the Armenian American community last year, the final FY2022 aid package for Armenia was increased to $45 million and included an additional $2 million in U.S. demining assistance for those affected by the 2020 Azerbaijan and Turkey-led attacks on Armenia and Artsakh. The ANCA has already issued calls on the White House and Congress for $50 million in US aid to Artsakh, to help resettle the over 100,000 indigenous Artsakh Armenians ethnically cleansed by Azerbaijan in 2020. To join the nationwide call to action, visit anca.org/aid.

Last week, a bipartisan group of 64 U.S. Representatives called on leaders of the House Appropriations Committee to stop military aid to Azerbaijan and allocate $150 million for Artsakh and Armenia to address the ongoing humanitarian and security crises caused by the Erdogan and Aliyev regimes. “The overdue process of holding Azerbaijan accountable must begin with Congress encouraging the Administration to fully enforce Section 907, restricting the State Department’s authority to waive this law, and enacting statutory prohibitions on any new U.S. military or security aid to Azerbaijan,” stated the lawmakers in the letter initiated by the Congressional Armenian Caucus and supported by the ANCA.

“Neither the Trump nor Biden administrations have investigated Turkey’s role in Azerbaijan’s aggression, including Ankara’s recruitment of jihadist mercenaries from Syria and Libya to fight against Armenians. Nor has either administration investigated reports of Turkish F-16s having been used in Azerbaijan’s attacks. Closer to home, we have yet to see either the Pentagon or Department of State look into potential violations of U.S. arms export laws related to the discovery of U.S. parts and technology in Turkish Bayraktar drones deployed by Azerbaijan against Artsakh,” continued Yerimyan.