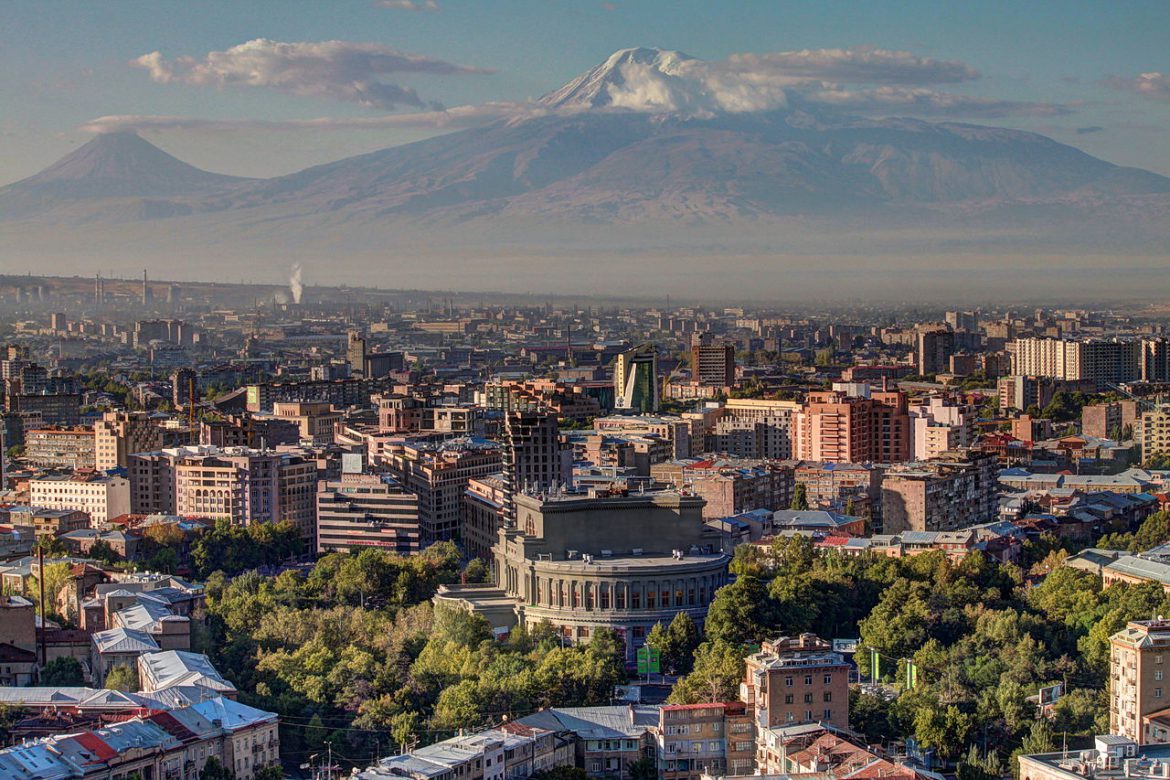 In contrast to many other places where Jews have lived, in Armenia they never suffered from pogroms or other persecutions.

BY ANI MELJUMYAN, Eurasianet – Armenia’s small Jewish community has been bolstered by about 200 recent arrivals fleeing Russia because of the war in Ukraine.

Since the start of Russia’s war in Ukraine, tens of thousands of Russians have fled to the Caucasus. Among them are members of one unexpected community: hundreds of Russian Jews who have relocated to Yerevan.

Nathaniel Trubkin, a 40-year-old Muscovite, moved to Yerevan on March 8, about two weeks after Russia launched its war in Ukraine, setting off a wave of repressions and international sanctions.

Like many Russians, he chose Armenia for its relative ease: It’s visa-free for Russians, most people speak Russian, and it’s simple to find a short-term apartment and set up a business. He also had some friends in Armenia who helped him get settled.

But still, it wasn’t easy. “I didn’t have a lot of money, whatever I had in my pocket when I arrived, and that was the case for many people,” Trubkin told Eurasianet. After a hasty search, he ended up in a “horrible” apartment.

The rough experience inspired him to set up Yerevan Jewish Home, which now assists other Russian Jews with their apartment searches, opening new bank accounts and setting up businesses. Since starting its work in April, the organization has helped about 200 Russian Jews relocate to Yerevan, he said.

Jews have a long history in Armenia. The 5th-century Armenian historian Movses Khorenatsi wrote that the 1st-century-B.C. King Tigranes the Great brought back 10,000 Jewish captives to Armenia after a war in the Levant.

“Greater Armenia historically has been a place where significant Jewish communities have lived,” Yerevan’s chief rabbi, Gershon Meir Burshtein, said in a recent interview. He said that in contrast to many other places where Jews have lived, in Armenia they never suffered from pogroms or other persecutions.

“In this context Armenia is not tainted with these kinds of memories, which means it can be a hope for creating, uniting efforts on the spiritual and material bases.”

The large majority of Armenia’s Jewish population left for Israel in the late Soviet and early post-Soviet period, and before this new wave of migrants, Armenia’s Jewish community was between 800 and 1,000 strong.

In the post-Soviet period, Israel has built close ties with Armenia’s rival Azerbaijan, and Armenians have frequent complaints about Israel’s arms sales to Azerbaijan or its failure to recognize the Armenian genocide.

But those tensions don’t spill over into how Armenians treat Jews, Trubkin said. “People here don’t treat me any differently when they find out I’m a Jew,” he said.

Now, Yerevan Jewish Home is helping the new arrivals form a new community together. It has funding from the charity American Jewish Joint Distribution Committee, which also helped set up similar efforts in the Georgian cities of Tbilisi and Batumi.

The organization has begun Hebrew-language classes and is working to set up Armenian lessons for new arrivals.

“Many [Russian Jews] came to Armenia and Georgia and were separated” from the Jewish community in Russia, Trubkin said. “It’s important to recreate that Jewish context for them, so what we can do now is to make them feel like they are among their own people.” He said that this “closeness” is one thing that Armenians and Jews, with long histories of persecutions and dispersals, have in common.

The new arrivals are not isolating, though, but rather integrating in and engaging with broader Armenian society.

“Since my wife is Korean and I’m a Russian Jew I thought it would be cool to mix two very different cuisines,” said Dmitriy Shangareov, the chef and owner.

Shangareov became familiar with Armenia when his sister married an Armenian and he moved to Yerevan before the war to set up the restaurant. “The plan before was to open a restaurant, hire some locals, teach them and move back to Moscow,” he told Eurasianet, taking a break from the kitchen and sporting a black T-shirt with the word “Ukraine.” But he was on a visit to Russia to pick up some equipment for the restaurant when the war started. He returned to Yerevan on February 28 and hasn’t left.

The restaurant opened in April and now has become a favorite of Yerevan’s many new Russians, Ukrainians, and Belarusians, whether Jewish or not. It also has attracted a clientele of curious locals, especially at lunchtime. “We didn’t expect to turn a profit in the first month and a half, but we have exceeded our expectations,” he said.

Another popular hangout is Mama Jan, a Russian Jewish-owned cafe in central Yerevan. It opened in 2021 and has become popular with the diaspora crowd.

At an open mic event one recent evening, the jokes alternated between English and Russian. Much of the comedy relied on broad stereotypes, and more than one performer cracked that “Armenians are like the Jews without the money.”

After the second repetition of the joke, there was an uneasy reaction from much of the crowd, and Trubkin raised his eyebrows in dismay.

But another Russian-Armenian spectator tried to smooth things over. “There’s no need to get angry,” he said. “Let’s see it as a chance for us to learn about each other.”

This story was originally published by Eurasianet