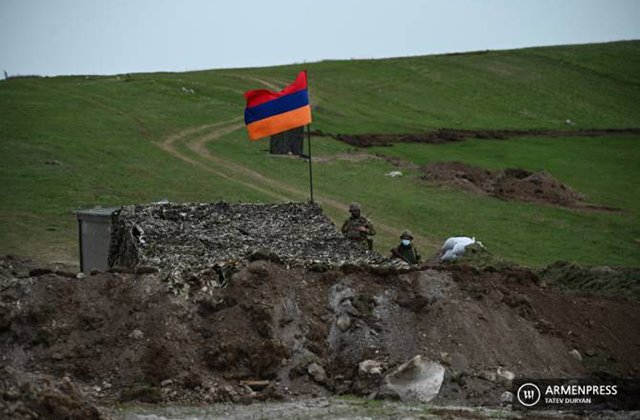 One Azerbaijani and two Armenian soldiers were reportedly killed in fighting in Artsakh (Nagorno-Karabakh) that resumed on Wednesday.

Artsakh’s Defense Army said that its soldiers died as a result of Azerbaijani drone attacks which also left 14 other Artsakh servicemen wounded.

In a statement, the army said that Azerbaijani forces also used mortars and grenade launchers to strike its frontline positions as well as one of its bases two days after trying unsuccessfully to advance into western Artsakh.

Russian peacekeeping forces are “taking measures to stabilize the situation,” added the statement.

The Azerbaijani Defense Ministry said earlier in the day that one of its soldiers was killed when its positions in the Lachin district west of Artsakh came under “intensive” fire in the morning. Azerbaijan’s Foreign Ministry afterwards blamed Armenia for the fighting, saying that Yerevan has not withdrawn its troops from Artsakh in breach of the Russian-brokered ceasefire that stopped the 2020 Armenian-Azerbaijani war.

Armenian Foreign Minister Ararat Mirzoyan put the blame on the Azerbaijani side during a meeting with Andrzej Kasprzyk, head of a small OSCE mission monitoring the ceasefire regime in the Artsakh conflict zone. Mirzoyan accused Baku of “arbitrary interpretation” of the truce accord and attempts to “destabilize the situation.”

The Artsakh foreign ministry likewise condemned the “new wave of Azerbaijan’s aggressive actions against Artsakh.” It also said: “The Armenians of Artsakh are steadfast and determined to live freely and independently in their land and overcome all difficulties in a dignified manner.”

Artsakh’s leadership reported on Tuesday that Azerbaijan has demanded the closure of the Lachin corridor serving as the sole overland link between Armenia and Artsakh and said traffic between them must be “organized along a new route in the near future.” Baku did not comment on that information as of Wednesday afternoon.

The secretary of Armenia’s Security Council, Amen Grigorian, dismissed the reported Azerbaijani demand as “not legitimate.” He argued that under the terms of the 2020 truce accord Russia, Azerbaijan and Armenia must work out before 2024 a plan for the construction of a new Armenia-Artsakh road.

“There is no agreed plan at the moment,” Grigorian told the Armenpress news agency.

The Artsakh police said late in the afternoon that the existing highway connecting Armenia and Artsakh remains open. “Free and safe passage is ensured by the Russian peacekeeping contingent,” it said in a statement.