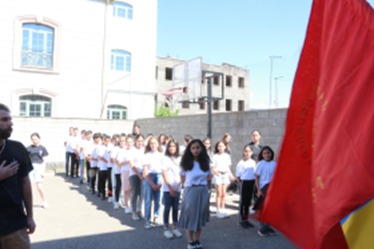 One of my biggest insecurities coming into the AYF Youth Corps program was my Armenian identity. Having just graduated from a university with little to no Armenian population, I felt the most out-of-touch with my mother culture than I had ever before. Although I was excited to begin my Youth Corps journey, I was nervous that I wouldn’t “feel” a connection with my Motherland or my culture. I couldn’t shake the fear that I wouldn’t understand the kids and they wouldn’t understand me because of my shaky Armenian and western dialect. Deep down, I was petrified that I had lost my hayrenik that I valued so much.

Upon arrival in Armenia after a grueling 24 hours of travel, we took a shuttle from Yerevan to Gyumri at the break of dawn. Despite being near delirious from the long trip, seeing the green rolling hills of my homeland in front of a beautiful sunrise struck a chord in me. The sensation is hard to explain, but I felt… home.

Before I knew it, the first week of camp in Gyumri came and went. I started off the week nervous and worried, but all of my fears were proven to be false. Although I struggled to understand the dialect at first, I quickly adapted and I was able to communicate with the kids and helpers with relative ease. By the end of the second week, I had come to love Gyumri. I had food that reminded me of my late grandmother’s, laughed with locals like I would with my dad, and saw myself so clearly in my campers. I was so proud of myself for being able to speak in my mother tongue effectively enough that I could communicate with those who have spoken primarily Armenian for their whole lives. Those two weeks showed me that at my core, I am much more Armenian than I ever thought I was.

The journey from Gyumri to Artsakh was a long and grueling one. Driving through 10 Russian checkpoints and seeing the Azeri and Turkish flag flying in Shushi gave me chills. Having finished our first week of camp in Artsakh, the impact of this war has had on the youth is clear. No matter the age, all they wish for is peace and prosperity, and it breaks my heart that the people of this region constantly have to live in fear. I hope that our camp has been able to provide a healthy distraction for these kids, and I look forward to connecting more with our next generation of Armenians. This trip has changed my life, and I can only pray I can have as much of an impact on the kids as they have had on me.