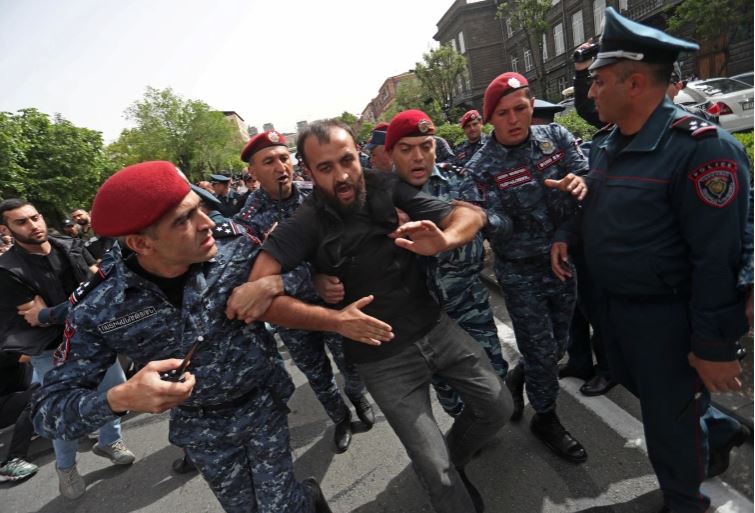 NEW YORK, NY, May 5, 2022 – Armenian authorities should thoroughly investigate recent attacks on members of the press by police and government officials, and ensure that those responsible are held to account, the Committee to Protect Journalists said Thursday.

On Monday, May 2, at a protest in the capital, Yerevan, against the country’s policy concerning the disputed Nagorno-Karabakh region, security officers punched David Fidanyan, a reporter with the news website AntiFake, in the shoulder and tried to push him away as he covered police arresting and beating protesters, according to news reports, a statement by several local media groups, and the journalist, who spoke to CPJ in a phone interview.

Fidanyan said that police officers in black masks repeatedly shoved him while he covered the protests, although he clearly displayed his press card. He said they also shoved AntiFake camera operator Ishkhan Khosrovyan and attempted to detain him, but agreed not to arrest him when other journalists intervened.

Also at that protest, Nare Gevorgyan, a reporter with the local news website MediaHub, approached Sargis Hovhannisyan, head of the country’s State Protection Service security agency, and asked about the police crackdown, according to those news reports, Gevorgyan, who spoke to CPJ via messaging app, and video of the incident published by MediaHub.

Hovhannisyan knocked Gevorgyan’s microphone away, and a State Protection Service officer obstructed MediaHub camera operator Arman Gharajyan, demanded he turn over his camera, and then hit the device; the pair refused, and Hovhannisyan kicked Gharajyan in the leg, according to those sources.

“The use of force against journalists who are doing their jobs is entirely unacceptable, all the more so when perpetrated by police officers and senior officials who have a duty to set an example in their treatment of the media,” said Gulnoza Said, CPJ’s Europe and Central Asia program coordinator, in New York. “Armenian authorities must swiftly investigate all uses of force against journalists covering the ongoing protests and ensure that media workers can do their jobs safely.”

Gevorgyan told CPJ that Gharajyan sustained a minor scratch to his leg during the scuffle and that his camera was slightly damaged. The other journalists were not seriously injured, Gevorgyan and Fidanyan said.

The Armenian prosecutor’s office has opened an investigation into Hovhannisyan’s alleged assault of Gharajyan, according to news reports.

CPJ emailed the police and the National Security Service of Armenia, which oversees the State Protection Service, for comment from the agency and from Hovhannisyan, but did not receive any replies.

Previously, on April 26, police officers in Yerevan shoved Tigran Petrosyan, a correspondent with the regional news website Caucasian Knot, as he attempted to film a protest over Nagorno-Karabakh, and prevented him from recording, the journalist told CPJ in a phone interview.

Also, on Wednesday, May 4, Parliamentary Deputy Hayk Sargsyan, with the ruling Civil Contract party, snatched the cell phone of Suzy Badoyan, a reporter with the news website Yerevan Today, when she attempted to interview him in parliament, local media reported.

Sargsyan slightly scratched Badoyan’s hand when he grabbed her phone, and returned it to her shortly afterwards, according to those reports. Last June, Sargsyan similarly grabbed the phone of another journalist attempting to interview him, returning the phone an hour later after deleting the video, according to news reports and a statement by local media rights groups.

CPJ emailed Sargsyan for comment but did not receive any reply.