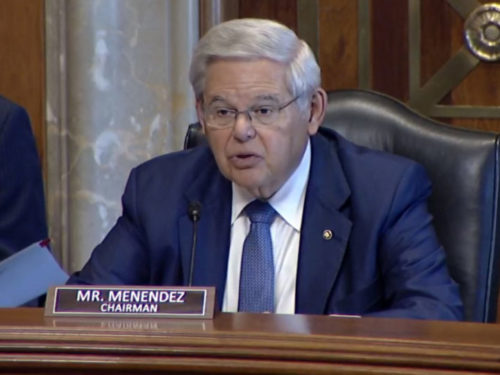 “It seems to me, the U.S. is in bed with Azerbaijan,” stated Chairman Menendez

WASHINGTON, DC – Senate Foreign Relations Committee Chairman Bob Menendez (D-NJ) led a stinging indictment of the U.S. policy on Azerbaijan, charging that the State Department witnesses testifying at the November 16th hearing were “wholly unresponsive” to concerns about the ongoing waiver of Section 907 restrictions on U.S. aid to Azerbaijan and the lack of meaningful U.S. assistance to Artsakh (Nagorno Karabakh) and Armenia following Azerbaijani attacks, reported the Armenian National Committee of America (ANCA).

“We want to thank Chairman Menendez for holding this hearing and shining a much-needed spotlight on our State Department’s deeply flawed policies in the Caucasus region,” said Aram Hamparian, Executive Director of the ANCA. “The inability of either witness to answer straightforward questions speaks to the incoherence of our present State Department policy – how very far the Administration’s reckless and irresponsible approach toward the region has drifted from actual U.S. interests and core American values.”

Chairman Menendez summed up their responses this way: “This has been one of the most disappointing hearings I’ve ever held, but it has crystalized some things for me. One is, it seems to me the United States is in bed with Azerbaijan.”

Citing Assistant Secretary Donfried’s testimony that the U.S. urges Azerbaijan to respect human rights, Chairman Menendez pushed back, “yet we give it money, and they continue to do what they want. Money is fungible, and so whether it is direct assistance that can hurt Armenia or not, money is fungible.”

Calling the Administration’s annual waiver of Section 907 restrictions on U.S. aid to Azerbaijan “automatic,” Chairman Menendez asked, “how on Earth can the United State justify sending any kind of support, security or otherwise, to a regime in Baku. It’s inexcusable. I personally think it’s morally repugnant, and it makes a mockery of the FREEDOM Support Act.”

Chairman Menendez called out the false parity in U.S. statements, citing US apparent refusal to clearly and unequivocally condemn Azerbaijani aggression against Armenia and Artsakh. “You have to recognize when there is an aggressor. If I am the recipient of the violence, and you are urging both sides to stop the violence, if there is one side that is the aggressor, you should direct your comments to the aggressor. We seem incapable of doing that.”

Chairman Menendez was visibly angered by the lack of State Department investigation into Azerbaijan’s use of illegal munitions against Artsakh during the 2020 war. “We have done NOTHING to verify the videos and evidence of cluster munition, of white phosphorus – which are illegal,” stated Chairman Menendez. He also called attention State Department’s inaction in the face of Azerbaijani torture, and murder of Armenian POWs, including the mutilation of a female Armenian soldier in September. “We have done NOTHING to verify the videos of the execution of Armenian soldiers, the abuse of female Armenian soldiers – we have done nothing. I ask you, are you aware of the videos, [you respond] ‘yes’, but did we do anything to verify them, ‘no’,” stated Menendez.

Both Assistant Secretary Donfried and Senior Advisor Reeker evaded the Chairman’s questions on U.S. assistance to help the people of Artsakh and Armenia following the 2020 war and Azerbaijan’s ongoing attacks, with Reeker citing a paltry $2 million in U.S. demining assistance. “You come to a hearing in which you can’t even tell me, with any degree of specificity, what humanitarian assistance we are providing. So, it’s totally, totally unacceptable, and you can tell the Secretary I will be looking for ways to express my dissatisfaction,” stated Chairman Menendez.

Senior Foreign Relations Committee member Ed Markey (D-MA) noted that this September, he and several colleagues had sent a letter to Secretary of State Antony Blinken and Secretary of Defense Lloyd Austen asking them to prevent any security assistance from going to Azerbaijan until Armenia and Azerbaijan reach a permanent lasting resolution to ensure peace and stability in Nagorno Karabakh. He noted that they had not yet received any answers to several questions they had posed in the letter and proceeded to ask them the witnesses directly about US aid to Azerbaijan and the lack of U.S. assistance to Artsakh.

Senator Chris Van Hollen (D-MD) asked if the State Department had issued an assessment on Azerbaijan’s unilateral attack on Armenia in September. Assistant Secretary Donfried replied that, “all of these things are complicated, and our focus has been, how do we move these two countries to a peace agreement after thirty years of conflict.” Sen. Van Hollen pressed again, asking whether the State Department felt that Azerbaijan’s attack was in response to Armenian aggression. Assistant Secretary Donfried, again evading the question regarding Azerbaijan’s unilateral attack, stated, “at that time, when we spoke to both parties [Armenia and Azerbaijan] our focus was on stopping the violence. I do think we played an important role in that violence being stopped.” Sen. Van Hollen responded, “with all due respect, that did not answer my question” and stated he would follow up later.

Senator Cory Booker (D-NJ) focused on the impact of the Ukraine conflict and on Russia’s role as peacekeepers in Nagorno Karabakh and, politically more broadly in the region. Sen. Ben Cardin (D-MD) asked whether the Organization for Security and Cooperation in Europe (OSCE) Minsk group mediation efforts on Nagorno Karabakh still had relevance. Others asking broader questions regarding Ukraine, Georgia, and the situation in the Caucasus region included Senators Jeanne Shaheen (D-NH), Tim Kaine (D-VA), and Chris Murphy (D-CT).

The ANCA live-streamed the hearing in full, video of which is available here:
https://www.youtube.com/embed/XVJjI7ISiLA?feature=oembed

Earlier this week, the ANCA submitted testimony to the Senate Foreign Relations Committee, which Senator Menendez announced would be included as part of the record of the hearing. ANCA Government Affairs Director Tereza Yerimyan stated that “the oil-rich Aliyev regime must be held accountable, through the immediate cessation of U.S. military aid and the investigation of its invasions, atrocities, and war crimes. These actions must be matched with a robust aid package to meet pressing humanitarian and developmental needs in Artsakh. In terms of U.S.-Armenia bilateral ties, we seek a paradigm shift in relations that prioritizes the security and viability of Armenia and Artsakh in the face of existential regional threats.”

Yerimyan’s testimony addressed a range of ANCA policy priorities including:

— Full enforcement of Section 907 restrictions on U.S. aid to Azerbaijan.
— No less than $50 million in direct U.S. humanitarian aid to Artsakh.
— Official inquiries into arms export violations related to Turkish drones.
— Strict scrutiny of ambassadorial nominations to Armenia and Azerbaijan.
— U.S. pressure on Turkey to stop obstructing justice for the Armenian Genocide.
— Investigation into Azerbaijani war crimes, including its use of prohibited munitions, recruitment of foreign mercenaries, cultural and religious desecration, and the illegal detention, abuse, and murder of Armenian prisoners of war.