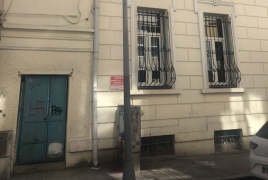 PanARMENIAN.Net – A swastika has been drawn on the gate of the Armenian Bomonti school in Istanbul, Turkey, according to images spreading on Twitter.

The vandalism comes ahead of the 107th anniversary of the Armenian Genocide, which was perpetrated by the Ottoman Empire between 1915 and 1923.

This is not the first time that anti-Armenian images and phrases are spray-painted on this very same school. In 2016, the exterior walls of the Bomonti Mkhitarian School were vandalized with graffiti that read: “One night, we suddenly will be in Karabagh.”