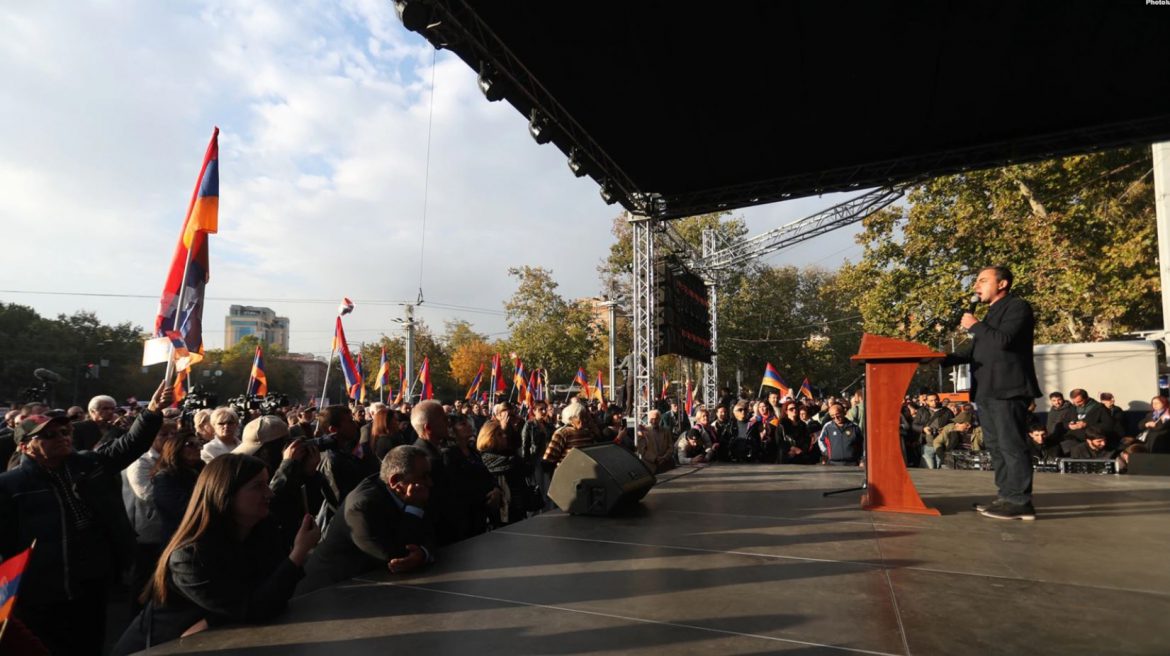 Armenian opposition groups gathered tens of thousands of supporters for a rally in Yerevan on Saturday in support of Artsakh’s right to self-determination.

The rally in Yerevan’s France Square came days after tens of thousands of Artsakh Armenians rallied in the central square of Stepanakert on October 31 at the urging of local political groups to support their joint statement saying that the Armenian government must not unequivocally recognize Azerbaijan’s territorial integrity through a bilateral peace treaty.

Speakers at the Yerevan rally organized by the Resistance Movement, a coalition of political parties and groups, including two opposition parliamentary blocs – Hayastan and Pativ Unem – again accused Prime Minister Nikol Pashinyan of planning major concessions to Azerbaijan in a planned peace treaty as a result of which, they claimed, Yerevan will formally recognize Baku’s full control of Artsakh.

They charged that Pashinyan and his government have no mandate to make this or other major concessions to Azerbaijan that would jeopardize Artsakh’s right to self-determination and Armenia’s sovereignty and territorial integrity.

Member of the Hayastan parliamentary faction Ishkhan Saghatelian, who has led street protests by the Resistance Movement, warned Armenian authorities against signing any document that would pave the way for Artsahk’s being formally recognized by Armenia as part of Azerbaijan.

He suggested that in order to preclude this and other major concessions Armenia needs to change its “top negotiator” at the talks with Azerbaijan, referring to Pashinyan.

“With this rally we are saying that Armenia welcomes the efforts of mediators towards establishing durable peace in the region. Armenia is ready to discuss all complex issues. Armenia is ready for hard and meaningful negotiations and solutions. But this cannot come at the price of national humiliation and loss of our homeland. No document that would limit Artsakh’s [Nagorno-Karabakh’s] right to self-determination can be signed and ratified. Such a document would be torn by our people and immediately after a regime change it will be declared null and void,” Saghatelyan said.

Saghatelyan stated, that the Pashinyan regime “does not express the collective will of the Armenian people.” He said that in order to “achieve victory” the opposition movement needs “an overwhelming number of people in the streets.”