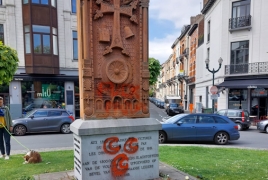 PANARMENIAN.NET – A memorial to the victims of the Armenian Genocide has been vandalized in Brussels’ Square Henri Michaux, the Armenian Embassy in Belgium reports.

Local Armenians gathered near the khachkar on April 24 to commemorate the 107th anniversary of the Genocide.

Images shared by the Embassy reveal that the symbol of Turkey’s Nationalist Movement Party – which is behind the Gray Wolves organization – have been spray painted on the monument. The monument has also been desecrated with an insulting note.

“Such actions, which are obvious manifestations of Armenian hatred and intolerance, are incompatible with universal values,” the Embassy said.