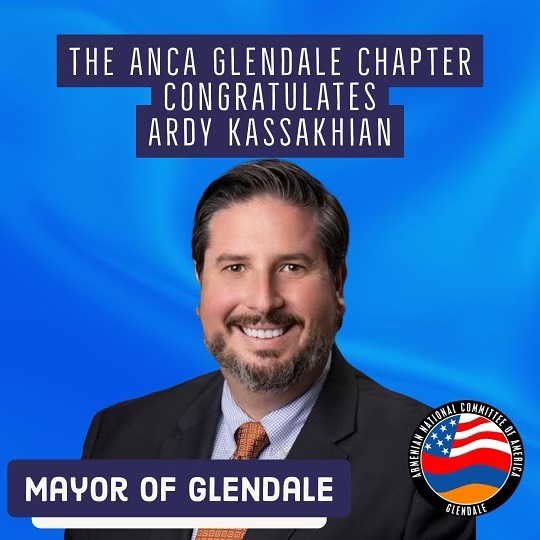 ANCA Glendale congratulated the newly-selected mayor for reaching this milestone as a public servant stating that “Kassakhian’s leadership is an asset to the great city of Glendale. Kassakhian began his service to the residents of Glendale as our City Clerk for 15 years and now, as our city’s Mayor. He also has strong roots in mobilizing the Armenian American community through the roles of Director of Government Relations and Executive Director of the Armenian National Committee of America regional office. We look forward to seeing all the successes that he will bring to our city.”

From Kassakhian’s biography on the City of Glendale’s website:

Born in Boston, MA, Councilmember Ardy Kassakhian’s family moved to Glendale in 1986. He is the product of Glendale schools having attended John Marshall and R.D. White Elementary schools, Wilson Middle School and Glendale High School (’94).   Prior to his election to City Council, Kassakhian served as the elected City Clerk for Glendale for 15 years having been elected and re-elected 4 times by Glendale’s voters.

Kassakhian graduated from the University of California Los Angeles with a Bachelor of Arts in History. He received his Master of Arts in Public Policy and Administration from Northwestern University.  More recently, he attended the Kennedy School of Government at Harvard University and successfully completed the Certificate Program for Senior Executives in State and Local Government.  He is also an alumnus of the Coro Public Affairs Fellowship.

Kassakhian was appointed by the California Senate Rules Committee to serve on the California New Motor Vehicle Board and to the Language Accessibility Advisory Committee by Secretary of State Alex Padilla.

Kassakhian is an adjunct instructor of Political Science at Glendale Community College.  He and his wife Courtney live in the Pelanconi neighborhood of Glendale with their son.

Kassakhian serves as the Vice Chair of the Glendale Housing Authority and was appointed to serve as Glendale’s representative on the Metropolitan Water District of Southern California Board of Directors as well as to the California Contract Cities Association.