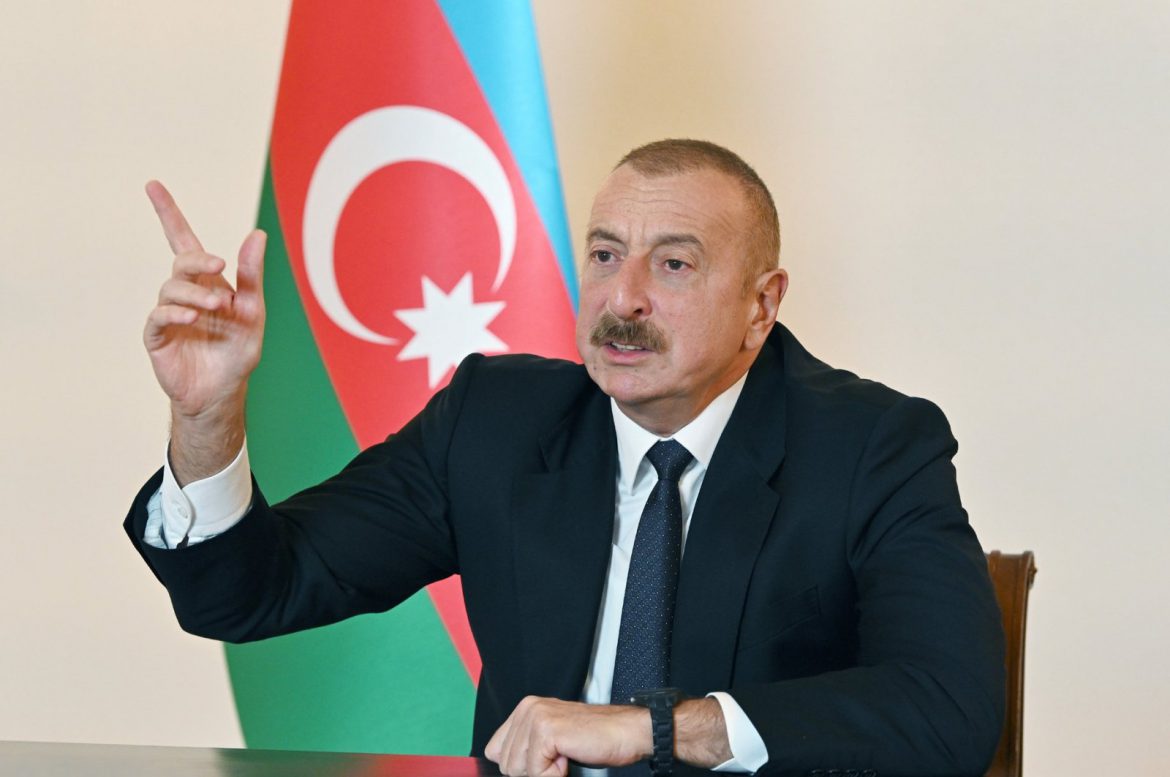 Azerbaijani President Ilham Aliyev threatened to launch renewed attacks on Armenia during a speech he delivered in Shushi on November 8.

Aliyev said that Azerbaijan’s Armed Forces captured strategic mountainous heights during the mid-September war, from which it could easily initiate attacks on Armenian military positions. From September 13-14, Azerbaijan launched attacks within the territory of Armenia proper, an unprecedented escalation of the ongoing conflict that left over 300 soldiers and civilians dead on both sides. During his speech on Tuesday commemorating the end of the 2020 Artsakh War, Aliyev referred to various Armenian cities, as well as Lake Sevan, by Azerbaijani names.

“After the September 13-14 military operations, the strategic heights of the Armenia-Azerbaijan border are under the control of the Azerbaijani armed forces. Armenia should be well aware of what this means,” Aliyev said. “Today, we can see the cities of Garakilsa [Sisian], Gafan [Kapan], Gorus [Goris] and Istisu [Jermuk] from those strategic heights. We are on the shore of Lake Bala Goyce [Lake Sevan]. All these are realities that we created.”

“Because most of Armenia’s military posts are visible from the heights I mentioned, and if there is a concentration of forces there, we will see it and take immediate action,” Aliyev continued.

Aliyev also admitted for the first time that Azerbaijan started the 2020 Artsakh War. Until Tuesday, Azerbaijani authorities had insisted that Armenia was responsible for initiating the 44-day war.

“We are not afraid of anyone. If we were afraid, we would never have started the Second Karabakh [Artsakh] War,” Aliyev said.

Azerbaijani armed forces have not left the territories they captured within Armenia’s borders during the mid-September attacks. They now hold advantageous positions from which to launch new attacks and shut down critical Armenian highways, explained Senior South Caucasus analyst for the International Crisis Group Olesya Vartanyan after visiting the Armenia-Azerbaijan border.

“Azerbaijani troops are now in a very important position. In some places, they are absolutely controlling the mountainous heights, but in some other areas, like for example near the town of Jermuk, they are sitting on the mountain. Let’s say something happens, there is another pretext for Azerbaijan to start another operation,” Vartanyan said during an episode of the Crisis Group’s War & Peace podcast.

Military experts from Armenia and the West told Vartanyan that it would take Azerbaijan “just a couple of days” to take over the Goris-Kapan road, which would “effectively cut the south of Armenia from the rest of the country.”

During his November 8 speech, Aliyev also repeated his demand for the so-called “Zangezur corridor.” The November 9 trilateral ceasefire statement ending the 2020 Artsakh War says that Armenia would provide transport links between Azerbaijan and its exclave Nakhichevan as part of the regional unblocking of transportation and communication links. Azerbaijani authorities have said that under this agreement, Armenia should provide a corridor passing through southern Armenia under Azerbaijani jurisdiction.

“For two years, we have not touched the cars going from Armenia to Karabakh and back on the Lachin road. We provide free movement,” Aliyev said. “Armenia committed to providing a road connection between the western regions of Azerbaijan and the Nakhichevan Autonomous Republic. Two years have passed, there is no feasibility study, no movement, no railway, no highway. How long do we have to wait?”

Head of the parliament’s foreign relations committee Eduard Aghajanyan responded that the corridor is a “red line” for Armenia that it will never concede.

“Our position has never changed on this issue and will never change,” Aghajanyan told reporters.

Aghajanyan said that Aliyev has not been constructive throughout the “entire negotiation process, especially in the post-war period.”

“Ilham Aliyev’s last destructive statements should not be connected with the negotiations conducted in Washington or Sochi,” Aghajanyan said, referring to recent trilateral meetings organized by the US and Russia between Armenian and Azerbaijani authorities.

Azerbaijani authorities have repeatedly called for the removal of all Armenian soldiers from Artsakh, including members of the Artsakh Defense Army. The Republic of Armenia has withdrawn its troops from Artsakh in response, yet it says that the November 9 ceasefire agreement does not call for the disbandment of local armed forces.

During his November 8 speech, Aliyev threatened to take “necessary steps” if the Artsakh Defense Army does not disband.

“Karabakh is our land. Russian peacekeepers are temporarily stationed there,” Aliyev said. “What are the Armenian armed forces doing in Karabakh? Our patience is not inexhaustible and I want to warn once again that if this obligation is not fulfilled, Azerbaijan will take necessary steps.”

Azerbaijani forces along the line of contact in Artsakh are stationed near civilian towns and communities and periodically fire on civilians. On November 5, a tractor was damaged during targeted shootings of civilians working in their fields in the Khramort community of the Askeran region of Artsakh.

“We have repeatedly stressed that Azerbaijani military positions, located next to peaceful settlements, pose a direct threat to the lives of civilians and their basic rights, the threatening consequences of which we have repeatedly witnessed after the ceasefire was reached,” Artsakh Human Rights Defender Gegham Stepanyan said.

While Azerbaijan denied the incident, it was confirmed in the daily bulletin of the Russian peacekeeping force in Artsakh.