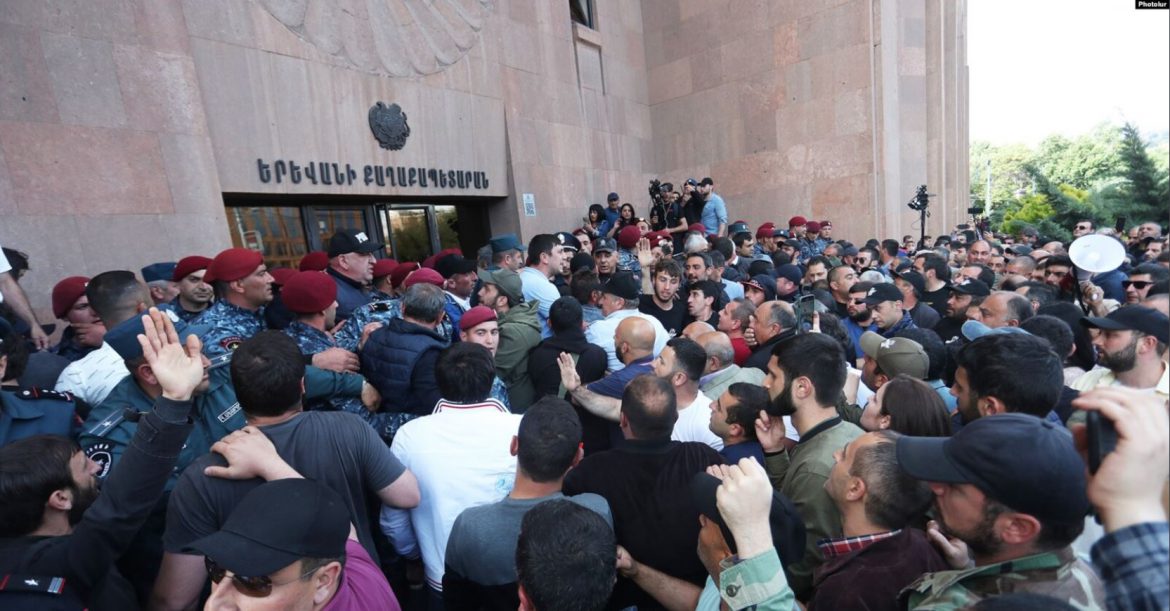 Azatutyun.am – Armenian opposition leaders and their supporters blocked the building of the Yerevan mayor’s office on Wednesday as they continued their daily rallies demanding Prime Minister Nikol Pashinyan’s resignation.

The building’s four entrances remained blocked for more than an hour, preventing municipal administration staff from leaving it. Riot police repeatedly warned the protesters that the blockade is illegal but did not try to disperse them.

Ishkhan Saghatelyan (Vice Speaker of Armenia’s Parliament and Chairman of the Armenian Revolutionary Federation Supreme Body), the main speaker at the more than weeklong protests, dismissed the warnings, saying Pashinyan used the same tactic when he swept to power in 2018. He accused the municipal administration of intimidating its employees sympathizing with the Armenian opposition.

Saghatelian promised more such blockades after the crowd marched to the city’s France Square, the scene of an opposition tent camp set up on May 1. Speaking at a late-night rally held there, he said the opposition will disrupt the work of central and local government bodies in a bid to create “diarchy” in the country.

Saghatelian said the organizers of the “civil disobedience” campaign also hope to attract bigger crowds in the coming days. “We must increase the number of our actions and their participants,” he told the crowd.

Earlier in day, the opposition organized several simultaneous processions of cars that drove slowly through various parts of Yerevan to try to drum up greater popular support for the campaign.

Pashinyan, who is accused by Armenia’s leading opposition forces of planning to make sweeping concessions to Azerbaijan, has rejected demands for his resignation.