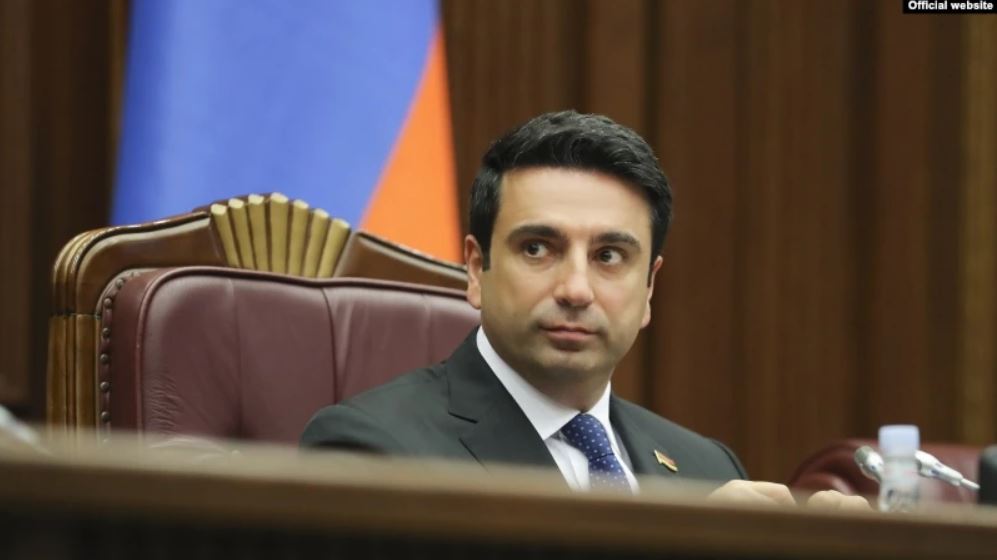 Azatutyun.am – Parliament speaker Alen Simonyan on Tuesday pointedly declined to say whether Armenia will champion Artsakh’s right to self-determination in negotiations on a peace treaty with Azerbaijan.

Responding to Azerbaijani proposals to negotiate such a treaty, the Armenian government has said that the question of Artsakh’s status must also be on the agenda of the talks. But it has not publicly clarified its position on the status or a mechanism for determining it.

Simonyan, who is a key political ally of Prime Minister Nikol Pashinyan, was similarly reticent about the issue when he spoke to RFE/RL’s Armenian Service.

Asked whether Pashinyan’s administration could recognize Artsakh as a part of Azerbaijan, he said: “As head of the legislative branch, I cannot be involved in the negotiating process or somehow predetermine it. The foreign minister, the head of the government will answer this question.”

Simonyan also would not be drawn on the reason for Yerevan’s failure to mention the Artsakh Armenians’ right to self-determination it its written proposals on the peace talks communicated to Baku.

Speaking in the Armenian parliament on April 13, Pashinyan said that the international community is pressing Armenia to “lower a bit the bar on the question of Artsakh’s status” and recognize Azerbaijan’s territorial integrity. He signaled Yerevan’s intention to make such concessions to Baku, drawing strong criticism from his political opponents and Artsakh’s leadership.

The authorities in Stepanakert made clear that the Artsakh Armenians will never agree to live under Azerbaijani rule. Armenian opposition leaders charged, for their part, that Pashinyan has agreed to Azerbaijani control over the disputed territory.

The opposition went on to launch daily street protests in Yerevan aimed at forcing Pashinyan to step down.

“You must quit in order for Artsakh to remain Armenian,” Ishkhan Saghatelyan (Chairman of the Armenian Revolutionary Federation Supreme Body) and one of the protest leaders, appealed to the prime minister as thousands of opposition supporters again marched through Yerevan on Tuesday.

Pashinyan and his political allies have rejected the opposition demands.

Simonyan said the ruling political team won a popular mandate to govern Armenia for the next five years in parliamentary elections held last June. He also rejected the opposition criticism of the government’s Artsakh policy.

“What does the opposition propose? Nothing,” said the speaker.