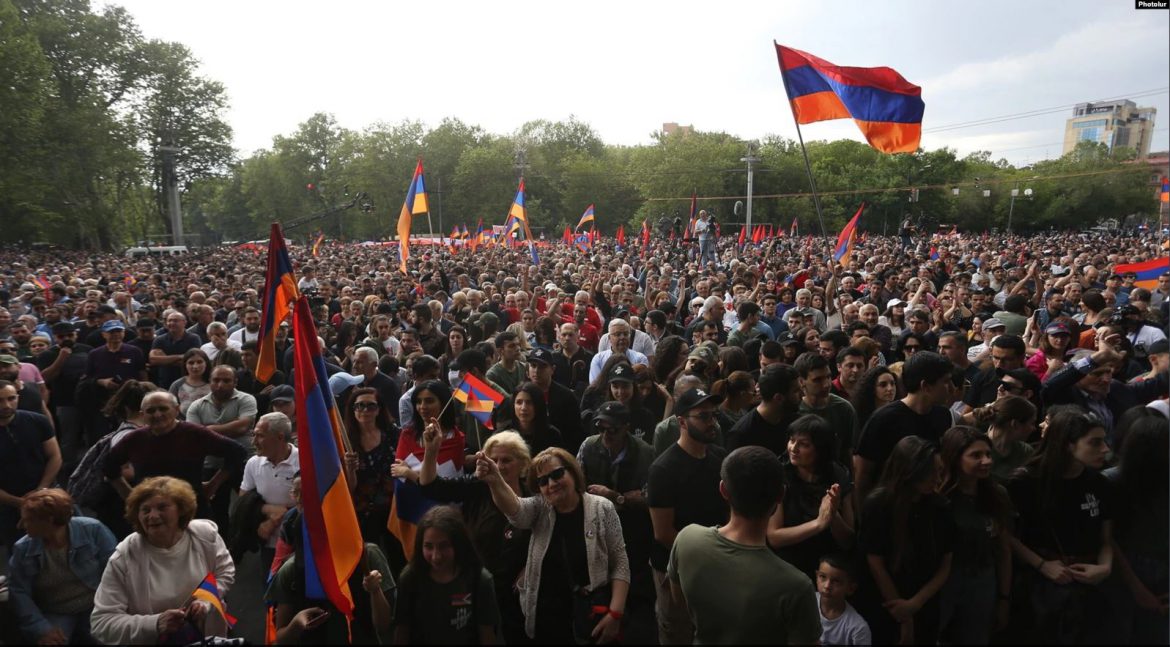 Thousands of protesters occupied a square in downtown Yerevan on Sunday at the start of what Armenia’s leading opposition forces described as a “civil disobedience” campaign aimed at toppling Prime Minister Nikol Pashinyan.

Azatutyun.am – The opposition Hayastan and Pativ Unem alliances pitched tents in France Square, the intersection of four key avenues, as they rallied their supporters there after days of more small-scale protests. They said they will block streets in the city center and other parts of the Armenian capital on Monday to step up the pressure on the Armenian government.

“We will not leave this place until we achieve victory,” said Anna Grigorian, a lawmaker affiliated with Hayastan.

Addressing the crowd, she and other opposition leaders reiterated that Pashinyan’s removal from power would prevent sweeping concessions to Azerbaijan planned by him.

Pashinyan signaled last month his administration’s readiness to recognize Azerbaijan’s territorial integrity through a bilateral peace treaty. Critics say he is intent on helping Baku regain control of Artsakh. The premier’s political allies deny this (editor’s note: Pashinyan himself has refrained from explicitly stating that he will not agree to Artsakh being part of Azerbaijan).

“These authorities have no mandate to lead the country to new concessions,” Ishkhan Saghatelian, a Hayastan leader, told the protesters before announcing the “large-scale actions of disobedience.”

“This is not a seizure of power,” he said. “This is an exercise of dignified citizens’ constitutional right to come out and oust these pro-Turkish authorities for the sake of Armenia, Artsakh and the Armenian people.”

Saghatelian also urged parliament deputies representing Pashinian’s Civil Contract to use the “last chance to correct your mistake” and defect from the ruling political team.

Some of those pro-government lawmakers have publicly denounced the opposition campaign and said it will end in failure.

The opposition set up the protest camp amid heightened security, with scores of riot police deployed nearby. They did not attempt to disperse the protesters.

Earlier on Sunday, Armenia’s Office of the Prosecutor-General warned the opposition against “provoking mass disturbances.”

In a separate statement, the National Security Service (NSS) claimed that there is a “real danger” of such violence. It said it will not hesitate to counter “any kind of actions destabilizing Armenia’s internal stability.”

Saghatelian, who is also a deputy speaker of the Armenian parliament, dismissed these warnings, saying that the opposition will be staging only peaceful protests. He also urged security forces to defy Pashinian’s “illegal orders.”