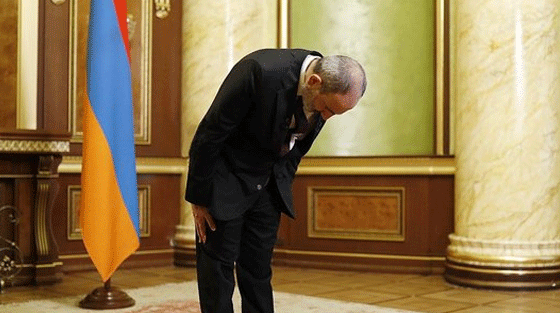 When Pashinyan and his cronies came to power as a result of their 2018 coup, using tactics directly out of the playbook of Western-backed “color revolutions”, they did so on a populist agenda that promised an end to corruption and a higher standard of living in Armenia. The majority of Armenians, especially in the Diaspora, only nominally knew who Pashinyan was.  They either overlooked or ignored the fact that Pashinyan had made a career of printing occasionally fake and often grossly misleading news for his family newspaper, which was funded for years by the National Endowment for Democracy (NED), a CIA front.

For years many unsuspecting Armenians had heard (and repeated) tales of how bad Armenia’s corruption was, without bothering to verify many unsubstantiated, and ultimately false claims.

Many Armenians had heard that former President Robert Kocharyan supposedly had a net worth of $6 billion and owned a private island and that former President Serzh Sargsyan had lost millions of dollars in a Montecarlo casino.  However, very few knew that many of these fables originated in Pashinyan’s “Armenian Times” newspaper.  Even fewer knew that Pashinyan’s annual grants from the CIA front NED were actually to “expand its coverage of corruption, poverty, and regional issues.”

And so, Pashinyan, who had made a career out of exaggerated and fake news, had a steady source of funding for his newspaper.  All he had to do was “expand” coverage of “corruption” and “poverty” in Armenia and so that’s exactly what he did.  For years, Armenians were spoon-fed a steady source of tales about “corruption” and how poor and unfortunate they were.  Never mind the fact that Armenia was, relatively-speaking, no more corrupt or poor than its neighbors or other former Soviet republics.

Years of propaganda about their “corruption” and “poverty” from Pashinyan’s and other similarly foreign funded media outlets made Armenians one of the most unhappy people in the world.  The “World Happiness Report 2018”, compiled by an international group of UN researchers, ranked Armenia 129th among 156 countries.

This despite the fact, that Armenia and Armenians had lived through perhaps the best two decades in their modern history.  For two decades, Armenia had managed to avert large scale war, had retained control of not only its Soviet-era borders but also territories (Artsakh) it had liberated after the collapse of the Soviet Union.  Armenia’s GDP and standard of living had improved dramatically over the same two decades, emigration had slowed, Armenia was enjoying international prominence, relative to its size, with successes in sports, culture, technology, and entertainment and, albeit slowly, programs were in place that were gradually improving Armenia’s democratic, societal, and economic standards.

Fast forward 4 years after Pashinyan’s “velvet revolution” and Armenia has gone through perhaps the worst period of its history since the Armenian Genocide. In the last few years, Armenia has effectively lost control over not just Artsakh, but parts of Armenia-proper.  Over 5,000 Armenian soldiers perished in a matter of a few weeks in a “war” that Pashinyan himself admitted could have been averted. Corruption is as rampant as ever.  Democracy, freedom-of-speech, and opposition rights have been rolled back to days not seen since the early years of independence or the Soviet era.  And Armenia is capitulating more and more on a daily basis to Russia’s, and even more concerning, Turkey’s demands.

“But It’s Not Pashinyan’s Fault“

Since the disastrous war in 2020 and Pashinyan’s capitulation, after what some claim was a fabricated war to hand over Artsakh, several rounds of apologetic narratives have sprouted up trying to defend Pashinyan.

One of the first apologetic narratives was that Armenia was bound to lose the war because Turkey supported Azerbaijan, and there was no way Armenia could stand up against a regional power like Turkey.  This narrative was quickly put to bed when it was revealed that Russia had offered to stop the war in its first weeks by sending in Russian troops to Artsakh, but Pashinyan had refused.  Furthermore, if Armenia’s traditional allies Russia and Iran were lukewarm in their support of Armenia, that was actually Pashinyan’s fault too, because he was the one who damaged relations with the two countries immediately after coming to power.

Another narrative was that Pashinyan should not be blamed for the losses, and it was really the former authorities who were to blame, for not keeping the Armenian military strong enough to defend Armenia and Artsakh.  This narrative is also easily dismissed.  Afterall, the former authorities had managed to defend Artsakh for 20 years before Pashinyan came to power.  What’s more, Pashinyan was already in charge for two years before Azerbaijan attacked, and if there were any gaps in Armenia’s defenses, it was Pashinyan’s responsibility to close them.  Instead, Pashinyan had wasted hundreds of millions of dollars buying fighter jets that Armenia could not use, because the missiles for them were not also purchased.  He had also replaced dozens of top military officials with people perceived more loyal to him.

The apologisms trying to blame everyone and everything else besides Pashinyan are too numerous to list here, but the one getting airtime recently, especially among Russophobe circles, is that while Pashinyan may be incompetent, the real reasons for Armenia’s troubles are shifting geopolitical realities.

“Aligned Russian and Turkish Interests Are To Blame”

To be more specific, these pundits, who either suffer from Dunning Kruger cognitive biases or are paid anti-Russian operatives, claim that Armenia is in its current bind not because of Pashinyan but rather because Russia and Turkey have aligned regional interests that are not currently favorable to Armenia.

What they fail to realize, or mention is that, even if Russia and Turkey have come to some sort of an agreement by which they are rhetorically “slicing” Armenia up between them, it is only because Pashinyan’s government itself has embraced a multipolar foreign policy where it is trying to balance its relations, unnecessarily, between the two regional powers.

Small countries such as Armenia do not get to play multipolar politics.  In the case of Armenia, it is even more ridiculous, and outright treasonous, to try to balance your relations between your historical ally and the country whose troops defend your borders with a historical enemy, who in the last century tried to wipe you off the face of the world and still denies it, and only a couple years ago, armed Azerbaijan with drones and other military support that killed thousands of your soldiers.

Can anyone imagine Israel trying to “balance” its international relations between the United States and Iran?  Even when the United States doesn’t go squarely along with all of Israel’s wishes, on thorny topics such as Iran or Palestine, the Israelis do not shift away from their unipolar relationship with the United States.  Regardless of whether a leftist, rightist, liberal or conservative government comes to power, Israel understands that it is too small and too surrounded by enemies to have the luxury of a multipolar foreign policy.

The reality is that Turkey, Russia, and Iran, the region’s powers, have always had matters between them in which their interests align, and others in which their interests clash.  This has been the case for centuries.  What’s also obvious is that each of these regional powers has drifted further away from the West in the past few decades.  Armenia, on the other hand, with its 2018 “velvet revolution”, decided to go the very opposite direction.

What we have as a result today is an Armenian government that is no longer trusted by its historical partners, Russia and Iran and one that Turkey has succeeded in turning into a bargaining chip between the three.  Basically, if Armenia is being “sliced” up between its powerful neighbors, it is only because Pashinyan and his government are continuing to allow it, if not outright encouraging it.  Whether it is because they are incompetent or traitorous is largely irrelevant.  Pashinyan, not a new geopolitical reality, is Armenia’s primary problem.

The Good News is Armenia Can Reverse its Losses

The good news is that none of what Armenia has gone through in the last few years is irreversible.  Armenia can rebuild its military and once again become one of the strongest in the region. Even the notorious capitulation agreement signed by Pashinyan is reversible.

The European Union has been trying to force a comprehensive peace treaty between Armenia and Azerbaijan, which if signed, would basically seal the deal, and formalize Armenia’s losses.  On the other hand, each of the agreements brokered by the Russians are effectively nonbinding, and can be reversed under different circumstances, because they do not have the power of a treaty, which would need to be ratified by Armenia’s legislative and judicial branches.

The sooner Pashinyan is gone, the faster Armenia can revert back to its time-tested foreign policy and geopolitical orientations.  The sooner it does that and regains the trust of its historical partners, the faster it can get off the trading block and go back to being an integral part of a mutually beneficial regional alliance.