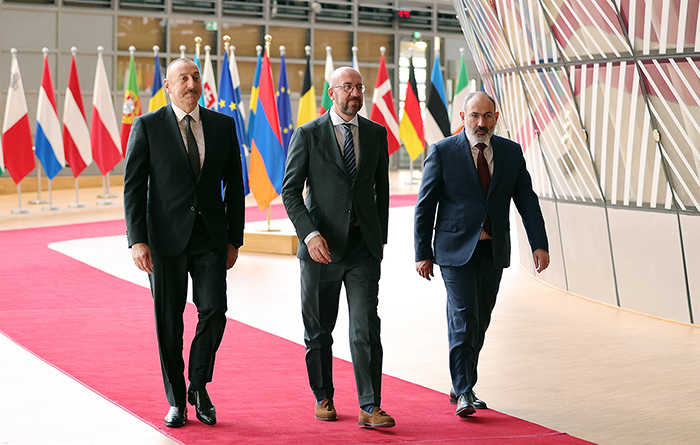 BRUSSELS, BELGIUM – Nikol Pashinyan visited Brussels over the weekend to participate in a trilateral meeting with Azerbaijani president Ilham Aliyev and European Council president Charles Michel. In a statement released after the meeting, Michel announced that the initial meeting of the commissions on border demarcation will be held “in the coming days” on the border of Armenia and Azerbaijan. Furthermore, the leaders of Armenia and Azerbaijan will resume discussing the unblocking of regional transit routes.

The three also discussed humanitarian issues. “We discussed humanitarian issues in detail, including demining, the release of detainees, and the fate of the missing. The first meeting of the joint commission on the border will be held in the coming days at the interstate border, where all issues related to demarcation and ensuring the best security of the border will be discussed,” Michel said, without providing a specific date.

Political analysts in Armenia have noted that Michel’s statement refers to Artsakh as merely “Karabakh” and not “Nagorno-Karabakh.” Azerbaijan is the only party which has officially referred to the geographic region as simply “Karabakh”, within what it claims are its internationally recognized borders.

Armenians call the region “Artsakh” or “Nagorno-Karabakh” within the context of the conflict, based on the name of the autonomous region “Nagorno Karabakh Autonomous Oblast” as it was called during the Soviet Union. This unprecedented use by Michel of just “Karabakh” has raised concerns that Armenia and Azerbaijan have already agreed on recognizing the region as part of Azerbaijan.

There have been ongoing protests in Armenia and its Diaspora demanding Pashinyan’s resignation since he and Aliyev agreed last month in Brussels to begin drafting a peace treaty to resolve the conflict and set up a joint commission on demarcating their common border.