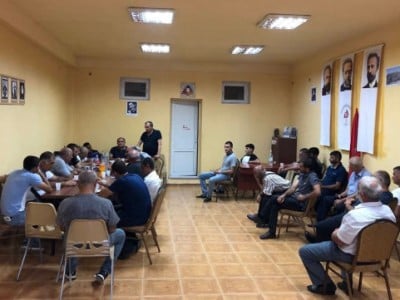 Representative of the ARF Supreme Body of Armenia, Parliament member and coordinator of the opposition “Resistance” movement, Ishkhan Saghatelyan had announced last month that the “Resistance” movement, in conjunction with the protests taking place in Yerevan and the actions to remove PM Nikol Pashinyan, is actively working to expand this movement in Armenia’s regional provinces as well, and that respective provincial councils have already been formed.

Since early August, ARF members and the representatives of the opposition “Armenia” Faction of parliament have started to visit the provinces and hold discussions with provincial supporters and residents concerned about the challenges facing Armenia. In this regard, an extensive discussion was held in Ararat Province recently about the situation in the country, the developments and dangers in Artsakh (Nagorno-Karabakh).

Leaders of the Resistance movement also visited and had meetings with supporters and concerned citizens in Syunik, Vayots Dzor, and Gegharkunik Provinces.