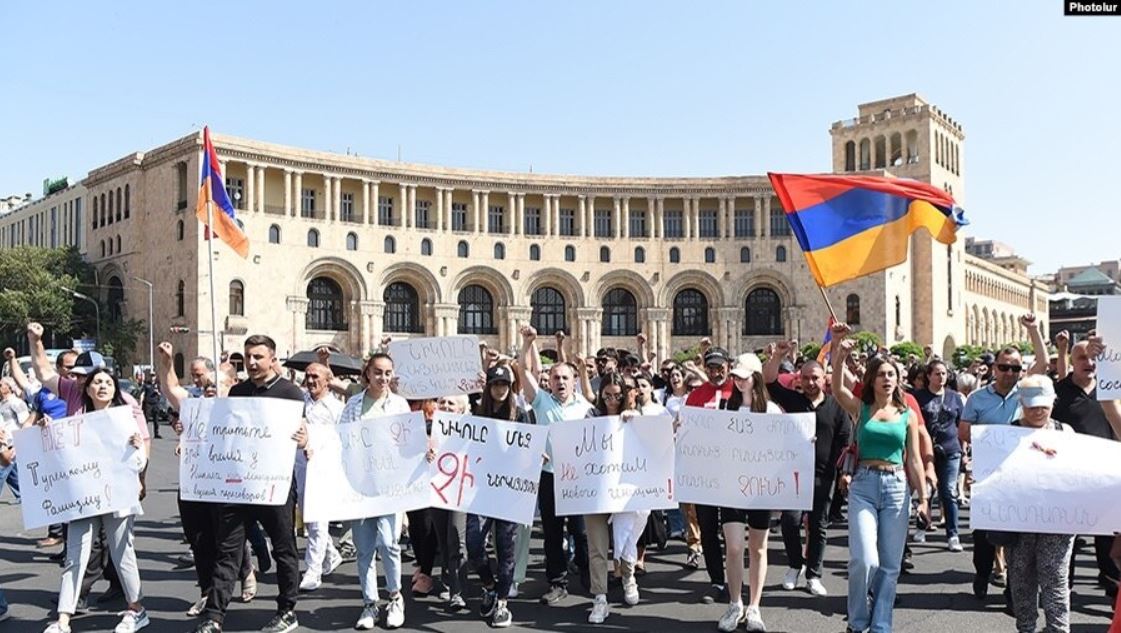 The demonstrators marched towards the Armenian Foreign Ministry building in the morning shortly before the start of Lavrov’s talks with his Armenian counterpart Ararat Mirzoyan held there. The authorities deployed scores of riot police and other security forces to keep them from approaching the building.

The crowd did not attempt to break through the massive police cordon, with opposition leaders addressing it outside Armenian prosecutors’ headquarters close to the Foreign Ministry. They all welcomed Lavrov’s trip.

“We are here to communicate a very clear message,” said Ishkhan Saghatelyan, the main speaker at continuing anti-government protests in Yerevan. “The people who present themselves as Armenia’s authorities and with whom you negotiate have nothing to do with the will and position of the Armenian people. Any agreement reached with them is null and void.”

Another opposition leader, Hayk Mamijanian, urged Moscow to do more to ensure the release of Armenian prisoners remaining in Azerbaijan and the withdrawal of Azerbaijani forces from an area in Karabakh seized by them in March.

The Armenian opposition staged similar protests during recent official visits to the country by the presidents of Lithuania and Montenegro. The protests were part of a “civil disobedience” campaign which the opposition launched on May 1 in a bid to force Prime Minister Nikol Pashinian to resign.

Opposition leaders accuse Pashinian of helping Azerbaijan regain full control over Nagorno-Karabakh. They also claim that he is ready to cede Armenian territory to Baku as a result of a planned demarcation of the Armenian-Azerbaijani border.

Mirzoyan downplayed the significance of the protests at a joint news conference with Lavrov. He said the opposition drive to topple the government has not attracted popular support. Echoing statements by other Armenian officials, the foreign minister also said that Pashinian’s political team won a mandate to run the country for the next five years in the 2021 general elections.

Moscow reacted cautiously to the protests on May 5. Kremlin spokesman Dmitry Peskov expressed hope that political stability in Armenia will be restored soon.