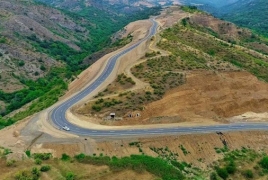 A new road connecting Nagorno-Karabakh to Armenia was opened to traffic late on Tuesday, August 30.

The five-kilometer-wide Lachin corridor became Karabakh’s sole overland link to Armenia following the 2020 war with Azerbaijan. Armenian forces pulled out of the rest of the wider Lachin district under the terms of the Russian-brokered ceasefire that stopped the six-week hostilities.

The truce accord called for the construction by 2024 of a new Armenia-Karabakh highway that will bypass the town of Lachin and two Armenian-populated villages located within the corridor protected by Russian peacekeeping troops.

Bowing to strong Azerbaijani pressure, the Armenian side agreed earlier this month to evacuate them by August 25 and start using a new bypass road constructed by Azerbaijan about a dozen kilometers south of that area. Azerbaijani troops entered those settlements on August 26 following the evacuation of their last ethnic Armenian residents.

Russian peacekeepers stayed on to guarantee the safety of vehicles travelling between Armenia and Karabakh. The Lachin corridor was officially shut down on Tuesday evening.

Karabakh’s top leaders were reportedly the first to inspect and use the new highway leading to Armenia.

“The Russian peacekeepers have already deployed there and will control the safe passage of citizens,” the Karabakh police said in a statement issued earlier in the day.

The Karabakh leaders arrived in an Armenian border village through a 5-kilometer road that links up to the highway built by the Azerbaijani side. The temporary road will function until Armenia builds its section of the new corridor. Government officials in Yerevan have said that work on that section will be completed by next spring.

Yerevan initially rejected Baku’s demands as “not legitimate,” arguing that the truce accord gave Russia, Azerbaijan and Armenia three years to work out a joint “plan” for the construction of the new Armenia-Karabakh road. The Azerbaijani Foreign Ministry said, however, that the three sides agreed on the “route” of the new corridor early this year.