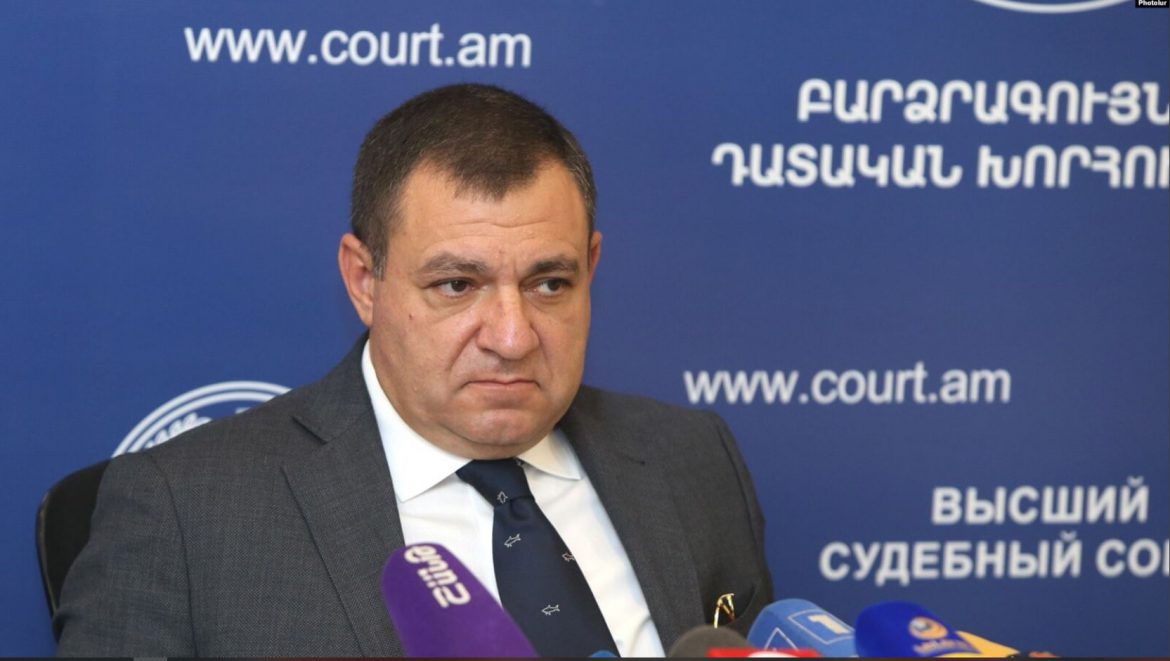 Azatutyun.am – The nominal head of a state body overseeing Armenia’s courts was formally relieved of his duties on Thursday three days after publicizing what he sees as evidence of illegal government pressure exerted on him.

Ruben Vartazarian was already suspended as chairman of the Supreme Judicial Council (SJC) in April 2021 immediately after being charged with obstruction of justice amid rising tensions with Prime Minister Nikol Pashinian. Pashinian’s political allies accused him of encouraging courts to free arrested government critics.

Vartazarian denied the charges and said that he was indicted as part of government efforts to replace him with Gagik Jahangirian, a controversial former prosecutor widely seen as a figure loyal to Pashinian. Jahangirian was named as acting head of the SJC pending the outcome of the criminal investigation into Vartazarian, which is still going on.

The SJC launched disciplinary proceedings against Vartazarian last month following a newspaper interview in which he claimed that Jahangirian was appointed as a member of the judicial watchdog in breach of Armenian law.

In its decision read out by Jahangirian, the SJC said Vartazarian has been sacked as both chairman and member of the council as well as judge of a Yerevan court of first instance for a “significant disciplinary violation.” The decision was backed by eight of the nine other SJC members.

Jahangirian claimed that the decision was made on June 16 and is only being made public now. He thus seemed to deny any connection between it and a scandalous audio of his February 2021 meeting with Vartazarian which the latter secretly recorded and publicized on June 20.

The audio caused uproar in Armenia, with opposition and civil society figures describing it as clear evidence of political orders executed by Jahangirian and his illegal interference in the work of law-enforcement bodies. They said that he must be not only sacked but also prosecuted.

The country’s main opposition groups portray Vartazarian’s revelation as further proof that Pashinian’s administration has been trying to tighten control over the judiciary, rather than reform it.

The SJC discussed the scandal on Tuesday but did not move to take even disciplinary action against its acting head.

For their part, prosecutors ordered the Investigative Committee to look into the audio. The law-enforcement agency has still not opened a criminal case in connection with it.

Vartazarian’s lawyer, Hovannes Khudoyan, said on Thursday that his client has been summoned to the Investigative Committee for questioning.