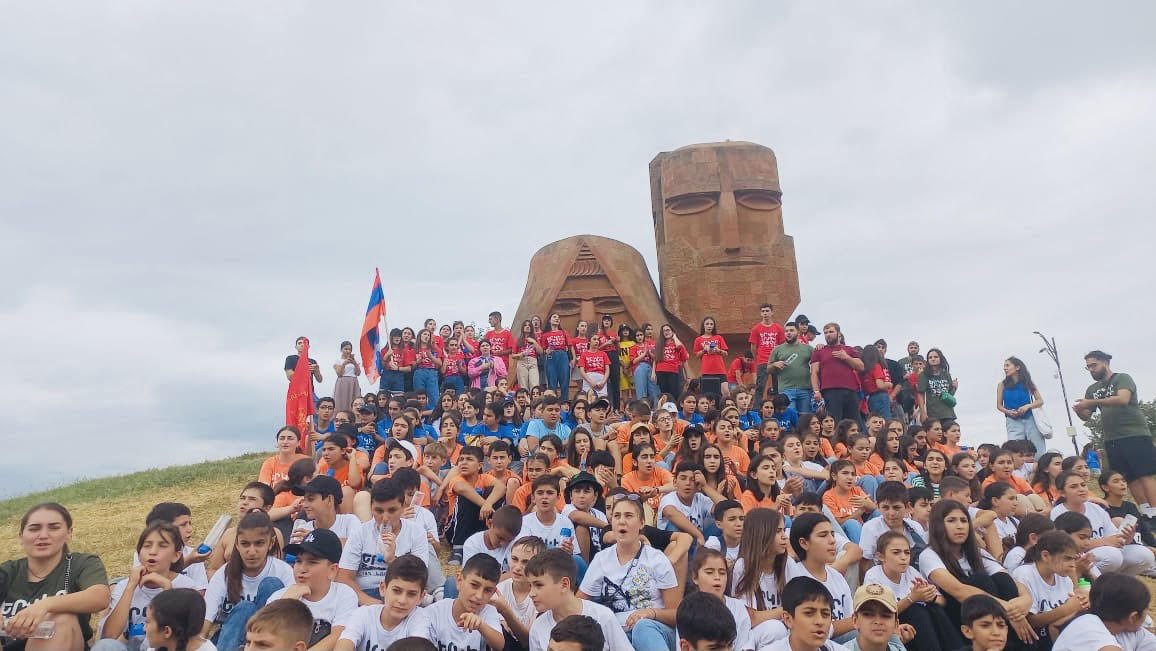 In response to an initiative of the Armenian Revolutionary Federation (ARF) Artsakh youth, several summer camps were organized this year across different regions in Artsakh. These camps were organized by FRA Nor Serund and representatives of youth organizations of the western and eastern US.

Hoory Minoyan, a resident of California, regularly visited the motherland from a young age and participated in the youth summer camps. During her travels, she got to know Armenia with its good and bad sides, its achievements and problems. Ultimately, she decided to move to  the homeland and has been living in Yerevan for three years. As a group leader, she takes great pride and responsibility in organizing these summer camps.

In mid-July, the youth camps were launched for more than 150 children in Stepanakert and in Vank village in the Martakert region for 40 children. The aim of the camps is to provide a happy and lively atmosphere for the youth of Artsakh, while strengthening patriotism and binding feelings of Armenian preservation, according to Minoyan. The theme of this year’s camps was the struggle for the new generation’s right to live and create in Artsakh. The camps included lectures, English lessons, sports and intellectual and developmental games. Participants of the Vank camp explored the village; they visited Nikol Duman’s house museum and participated in sports games and fire training classes.

Kolya Avetisyan, a camp group leader and member of FRA Nor Serund, says that since 2001 they have opened a computer classroom, provided Christmas gifts for the children of Aghavno and purchased gas cylinders during the March gas cuts for needy families.

Avetisyan says that he is excited by the strength, spirit and unbreakable will of the children of Artsakh. Children have changed since the war, Avetisyan says. The organizers tried to provide interesting and meaningful entertainment for the young participants during the two weeks of camp, taking into account that few children have the opportunity to vacation at resorts with their families during the summer.

During the two weeks, children and teenagers ages eight to 16 learned the history of Hai Tahd and became familiar with Armenia and Artsakh’s heroic historical pages and victories.

One of the most exciting moments for the participants of the Stepanakert camp was the walk with the whole group to Tatik-Papik. The youth in Askeran visited the Askeran fortress.

Nika was delighted to participate in the Stepanakert program. The 12-year-old student learned patriotic songs and dances and played games. Nika says that during the 2020 war, her school was bombed and most of the building was destroyed. This tragedy saddens her; she and her classmates are now forced to attend classes in the second shift, which does not give her the opportunity to attend her favorite painting and carpet making groups and other activities after school. These camp journeys, though short, fill that gap to some extent.

Luisa also participated in the Stepanakert camp. She told the Weekly that she felt united with the other children and well cared for by the group leaders. Campers were divided into groups with the colors of the Artsakh flag. Each group did different activities and then came together for lessons and games. “After the war, everything changed. It seems that we have all become serious, because our friends have lost brothers and relatives. We try to relieve them of pain and organize an interesting pastime,” she says. Luisa enjoys listening to stories about Armenian avengers and learning lessons in Armenian history. She believes that Armenians should learn their history well in order to be able to protect their rights in the future, to prove to the world that Artsakh is Armenian, and to confirm their inalienable right to live on their land.

Armen and Arman are friends; both are 13 years old. Armen is from Stepanakert, and Arman is from Shushi. At camp, they learned about discipline, the history of the Genocide and Armenian heroes. Arman misses Shushi, his house, his school and his favorite places to play with his friends. After graduation, he wants to join a special forces unit to liberate Shushi and other occupied lands.

Levon (11 years old) and Tigran (nine years old) are brothers and three-time karate champions of Armenia. They enthusiastically participate in all the camp activities, but they like playing football with their friends the most. In addition to various chapters in Armenian history, they enjoy learning about French culture. Levon says that after the war it was hard to see his beloved city destroyed, but the hardest thing was the death of his friend Nver’s father. He says his circle of friends changed drastically. Some of his former classmates moved away and made friends from Shushi, Hadrut and other displaced regions. Levon believes that by studying well and retaining the knowledge acquired from camp, he and his peers will be able to bring back the lost lands and study in their own schools again.