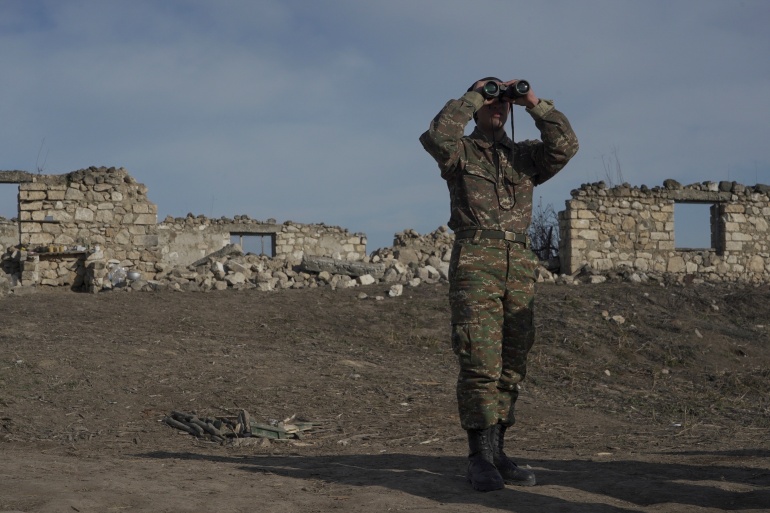 By Lillian Avedian, The Armenian Weekly

Azerbaijan has launched a deadly attack across several regions of Armenia’s eastern border.

The Ministry of Defense of Armenia reported “intensive shelling” of Armenian positions in Sotk, Vardenis, Goris, Kapan, Jermuk, Artanish and Ishkhanasar, as well as civilian infrastructure. Armenian officials say that Azerbaijan is using combat drones, artillery and large caliber firearms. The attacks started shortly after midnight on September 13. The towns and villages under attack are located in the Syunik, Gegharkunik and Vayots Dzor provinces along Armenia’s eastern border with Azerbaijan.

Armenia’s defense officials are reporting an unverified number of casualties. As of 4:00 a.m., the MoD of Armenia said that the fighting along the border continues with “unabated intensity” and that the Azerbaijani military have taken “positional advancement actions.”

Armenian Ombudswoman Kristine Grigoryan said that civilian infrastructure, including residential homes, are being targeted by Azerbaijani forces. The human rights defender’s office has received calls that Kapan, Goris, Jermuk, Vardenis and other communities have been under heavy shelling since midnight, placing their civilian populations at “great danger.”

The Security Council Coordinator of Goris Artur Hojabaghyan told reporters that the sounds of shelling could be heard in Goris. He urged residents to take refuge in shelters rather than attempt to leave the town.

The MoD of Azerbaijan confirmed the attacks, stating that they were in response to “provocations” and a “large-scale sabotage” by the Armenian side, which Armenian military officials have called “an absolute lie.” Azerbaijan’s MoD said that members of the Armenian armed forces planted mines in the Kelbajar and Lachin districts, which were ceded to Azerbaijan at the end of the 2020 Artsakh War.

Armenian Prime Minister Nikol Pashinyan chaired a Security Council session in the hours following the start of the attacks. The council decided to formally apply to Russia under the provisions of a mutual defense agreement, as well as to the Collective Security Treaty Organization and the UN Security Council, “regarding the aggression against the sovereign territory of the Republic Armenia.”

Before that meeting, PM Pashinyan had a phone conversation with Russian President Vladimir Putin to provide “details about the provocative, aggressive actions by the Azerbaijani armed forces” against sovereign Armenian territory. The Armenian PM also spoke with French President Emmanuel Macron and informed him about the “provocative and aggressive military operations” against Armenia. The PM “emphasized the importance of an adequate reaction of the international community,” readouts of each call from the PM’s office say.

Pashinyan and Putin “agreed to keep in operational contact,” according to the statement. Meanwhile, Macron “considered further escalation of tension unacceptable.”

US-based human rights organization Freedom House said that it was “alarmed by reports of Azerbaijani Armed Forces intensively shelling the southern Armenian settlements of Goris, Jermuk, Vardenis and Sotk.” “We call for an immediate ceasefire and urge both parties to find a peaceful resolution,” Freedom House tweeted.

US Representative Adam Schiff, a longtime advocate of the Armenian American community and vice-chair of the Congressional Armenian Caucus, is demanding an immediate end to US arms and aid to Azerbaijan after its “egregious violation of the ceasefire and direct attack on Armenia’s sovereignty.”

Congressional Armenian Caucus co-chair US Representative Jackie Speier also expressed her outrage. “These are internationally recognized Armenian towns, NOT disputed territory,” she tweeted. “It’s unconscionable that the US continues to provide Aliyev with military aid.”

Just a day before these ongoing attacks, authorities from Artsakh reported that the Azerbaijani armed forces opened fire on Armenian positions in Karmir Shuka and Taghavard in the Martuni region of Artsakh. The firing began at 4:00 in the morning on September 12 and lasted for 30 minutes. Two residential homes in Karmir Shuka and one home in Taghavard were damaged, according to the Artsakh Ombudsman Gegham Stepanyan.

Officials in Artsakh said that as of 1:50 a.m. on Tuesday, the Artsakh border is relatively stable.

The attacks follow two weeks of daily accusations of ceasefire violations against Armenia issued by the MoD of Azerbaijan, all of which the Armenian MoD denied.

Meanwhile, on September 5, 19-year-old Armenian soldier Arman Gagik Sargsyan was killed by Azerbaijani fire while stationed at an Armenian military post in Gegharkunik. Three days later, the Armenian MoD said that the Azerbaijani armed forces fired at Armenian positions along the southeastern part of the Armenia-Azerbaijan border. It reported no casualties.

On September 10, the Azerbaijani Defense Minister Zakir Hasanov convened a meeting with the top military commanders, during which they were “ordered to be ready to suppress any provocation immediately and decisively.”

Armenian politicians have warned that Azerbaijan could renew its provocations, following the continuous accusations of ceasefire violations by the Azerbaijani MoD and the outcome of the Defense Ministry meeting.

“We all know that when Azerbaijan plans its latest border provocation, it organizes a pretext based on false information to legitimize that provocation, before carrying it out,” Armenia’s ambassador-at-large Edmon Marukyan wrote on Facebook on September 12.

“All actors in the international community who are interested in the Armenia-Azerbaijan peace process and the resolution of the Nagorno-Karabakh conflict, must carefully follow and clearly understand that once again Azerbaijan has started the preparatory process for a provocation,” Marukyan continued.

This is a developing situation. We will provide updates as they become available.