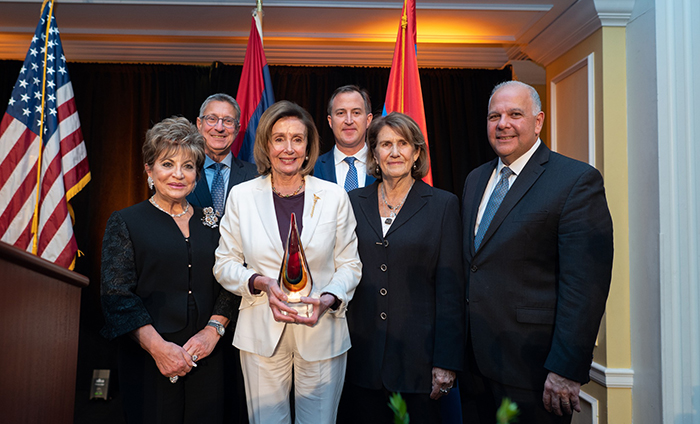 WASHINGTON, D.C. – On Thursday, November 17, 2022, the Armenian Assembly of America (Assembly) celebrated its 50th anniversary with a special event honoring the Speaker of the House of Representatives, Nancy Pelosi (D-CA), with the Assembly’s Ambassador Henry Morgenthau Award for her strong support of and leadership on U.S. affirmation of the Armenian Genocide.

Assembly Board of Trustees member Annie Simonian Totah stated during opening remarks that 2022 has been a very important year for the Assembly as it celebrates its 50th anniversary. She acknowledged distinguished guests, Ambassadors, Embassy representatives, military attachés, elected public officials, and current and former statesmen, including Ambassador John Evans, a former recipient of the Ambassador Morgenthau Award, the Ambassador of Ukraine to the U.S. Oksana Markarova, and the Ambassador of Armenia to the U.S. Lilit Makunts.

In her remarks, Pelosi stated that visiting the Armenian Genocide Memorial in Yerevan was a “life-changing experience, where we learned the horrific truths of the 1.5 million Armenians murdered, and where we spoke the names of the communities that were erased. At that eternal flame, we felt the pain and open wounds.”

In his remarks, Rep. Pallone thanked the Assembly and the other Armenian organizations across the Diaspora who work on behalf of Armenia and Artsakh.