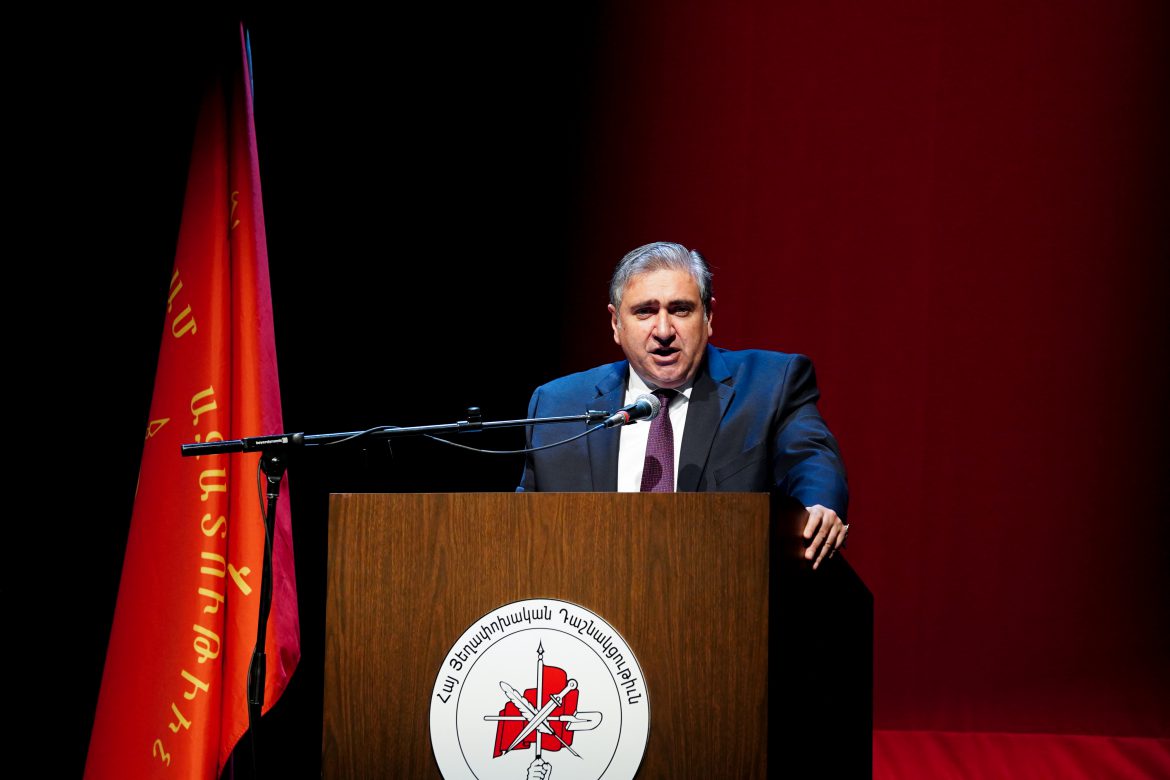 GLENDALE, Ca – On Sunday, the Central Committee of the Armenian Revolutionary Federation Western United States of America hosted its traditional “ARF Day” celebration at Alex Theatre to commemorate the organization’s 131st anniversary. The program commenced with a flag raising ceremony by the official Homenetmen Western United States color guard and marching band, during which the flags of the United States, Armenia, Artsakh, and ARF were ceremoniously situated on the stage.

Specially prepared documentary video clips were presented depicting the history of the ARF from the days of its founding to the present day, during which the ARF has played an instrumental role in the creation and strengthening of the Armenian statehood and Diaspora institutions.

Prelate of the Western Prelacy of the United States, Bishop Torkom Donoyan performed the invocation.

Master of Ceremonies Dikran Sassounian then welcomed all attendees, recognizing a multitude of elected officials, organizational leaders, and other dignitaries present at the event. Sassounian briefly remarked about the past and present challenges faced by the Armenian Revolutionary Federation in the United States and worldwide, concluding that no force can impede the mission of the organization.

Sassounian then invited Preny Alaverdian, representing the Armenian Youth Federation Western Region, to deliver remarks of the ARF’s youth organization in the region. Preny Alaverdian’s full speech will be available in a separate post.

After the first speech, the “Adana” dance ensemble performed the first of its multiple dance renditions.

Central Committee member Khachig Tazian delivered remarks on behalf of the ARF Western United States of America. Reflecting on the events of the last two years in Armenia and the Armenian world, he stated, “Today we come to confirm that the ranks of the Armenian Revolutionary Federation in the Western United States can not fail to be part of the struggle that is once again imposed upon the Armenian people. Today, we come to accept the challenge and declare our determination to fight again, to expand, to accelerate, and to organize. It is time to unite and reject all attempts and schemes that seek to weaken our will, our determination and our capacity.”

Specially prepared videos of remarks were played from Arshak Mesrobian, representative of the ARF Bureau’s Youth Office, and Ishkhan Saghatelyan, Chairman of the ARF Armenia’s Supreme Council and Vice Speaker of Parliament, who was slated to be the original keynote speaker of the event but due to the country’s adverse conditions, needed to stay in Armenia.

Arthur Khachatryan was born in 1972 in Yerevan. In 1994 he graduated with honors from the Faculty of Physics of Yerevan State University. In 1996 he graduated from the Faculty of Business Administration of the American University of Armenia. At the same time he studied at the Institute of Radiophysics and Electronics of the National Academy of Sciences of Armenia, graduating in 1997. In 2001 he graduated from the Imperial College, University of London School of Management with a Master of Business Administration (MBA). In 2004 he defended his scientific thesis, receiving the degree of Candidate of Physical and Mathematical Sciences.

Due to his specialties, he has held various positions in Armenian international institutions. In 2005-2007 he was the director of the California Office of Investment and International Trade in Armenia and the CIS. In 2011-2013, he held the position of Pedagogical Coordinator (Dean) and Head of the Department of Finance and Accounting at the French University of Armenia. In 2011-2015, he lectured at the same university.

He has been a member of the ARF since 1991. He is a senior reserve lieutenant.

Khachatryan began his speech in Armenian, and concluded it–for the elected officials and other non-Armenian speakers in the hall–in English, where he explained the current situation in Artsakh and the proposed means to a just solution to the issue. He emphasized why a nation cannot have a future based on concessions and capitulation and why lasting peace is an impossible outcome of the current processes.

He called on all Armenians to unite to struggle against this extremely disturbing period of Armenian history, against the internal and external enemies of Armenian statehood.

Khachatryan also called on the OSCE Minsk Group and the United States, as co-chairs, to fulfill their responsibilities and act justly, respecting the right of nations to free self-determination and recognizing the rights of the people of Artsakh. (We will post a translated version Arthur Khachatryan’s speech in its entirety in a separate article).

The event’s final official remarks were delivered by ARF Bureau member Khajag Mgrdichian.  He concluded his brief message with the following words: “We are all convinced that the person and the personal are very vulnerable to even the slightest loss of their homeland. Today, in Armenia, Artsakh and the Diaspora, we are facing the imperative of exerting our will to fulfill our mission of liberating Artsakh and Armenia.” (We will post a translated version of Khajag Mgrdichian’s speech in its entirety in a separate article).

The event also provided an opportunity for the Central Committee to officially announce the publication of its new official newspaper, Oragark. It was announced that the printed copy of the first issue of the newspaper was distributed to those present at the event, and the newspaper will be online, bilingual, and will cover a wide range of issues of concern to the Armenian-Armenian community.

During the program, a video clip highlighting the activities of the AYF and Juniors of the region were played, including a moving message from Hampig Sassounian’s to youth camp participants .

A special memorial was also played, to remember all the members of the regional organization who had passed away in the last year.

To conclude the event, Karnig Sarkissian, legendary performer of Armenian traditional and revolutionary songs, performed “Akh Hayrenik” and “In Memory of Kukunian”, accompanied by Armen Babayan on the piano.

The event was attended by over a thousand members of the community and was broadcast to thousands across the world via the Internet.