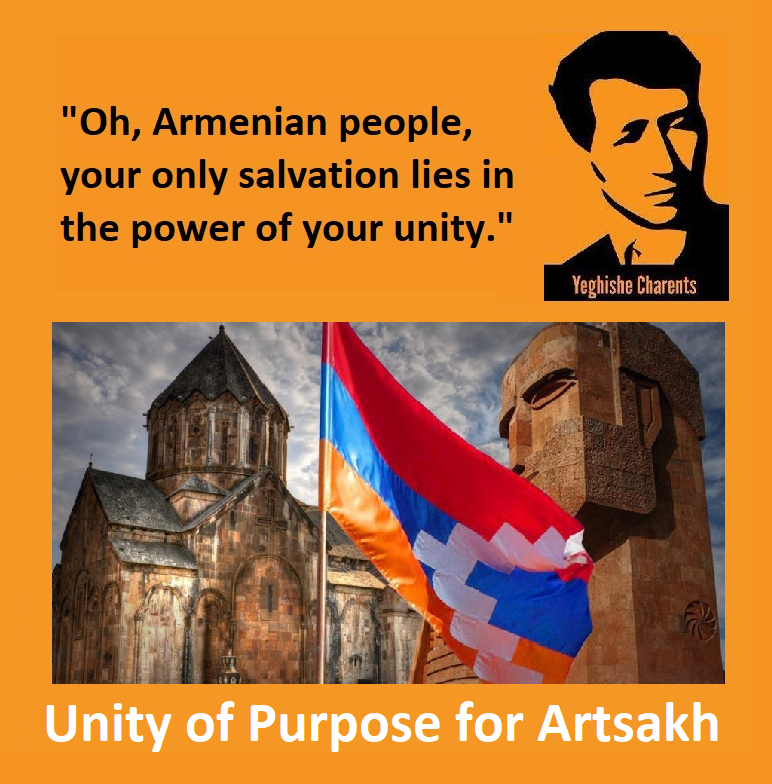 As we say goodbye to 2022 and bring in the new year let’s remember that we have 120,000 Armenians held hostage in Artsakh by Azerbaijan with support from Turkey, cut off from the world for over 3 weeks without medical supplies, food and at times no gas during the freezing winter.

Remember that we are at our strongest when unified with a national purpose and focused action, which undoubtedly today remains Artsakh and the Armenian population living there, and that a safe and secure Artsakh also protects Armenia.

Remember the men, women, children, elderly and the infirm who are fighting for their survival, their right to self-determination and to live freely and safely on their own lands, and as we chart a course of action going forward remember the not-so-distant past starting with the Ottoman Empire, Young Turks and Ataturk’s plans of eliminating the Armenian population to connect Turkic peoples from the Caucasus to Asia.

Remember that from 1988-1994 the Armenians of Artsakh, Armenia and the Diapsora stood together against Azerbaijan’s tyranny and massacres (pogroms) in what evolved into a full-scale war with the liberation of most of Artsakh despite the agenda and policies of the Ter-Petrosyan Regime.

Remember that during the “cease fire” years starting in 1994 Azerbaijan continuously fired indiscriminately at border villages including schools, churches, and medical centers.

Remember that in 2016 Azerbaijan attacked Artsakh along its entire border and failed to advance due to the great sacrifice of our Armenian soldiers, our boys, including volunteers from ARF and others.

Remember that in 2018 Pashinyan took power in Armenia with false promises of a better life for everyone, securing Artsakh’s freedom and eliminating corruption, then removed experienced Armenian military leadership, continuously snubbed Russia even though it was protecting Armenia’s border with Turkey, deprioritized patriotism while pretending to fight corruption only to insert their own family and friends in key positions; increased nepotism surpassing the corruption of prior regimes.

Remember that in 2020 Azerbaijan attacked the peaceful Armenian Christian population of Artsakh with support from Turkey who provided drones, military personnel, and Islamist (ISIS) mercenaries… with additional drones from Israel…  with US companies providing key components used in Turkish drones… with illegal phosphorus from Ukraine dropped on innocent civilians… in the 44-day war.

Remember the thousands of Armenians soldiers and volunteers who gave the ultimate sacrifice to protect what remains of Artsakh; remember the Yeraplour cemetery and remember the Pashinyan regime hiding the rotting bodies of fallen Armenian soldiers in basements to cover up the losses, disrespecting those heroes and their families while lying to the people about winning the war.

Remember that in 2021-22 Azerbaijani forces entered Armenia proper and took the main highway connecting Armenia to its southern provinces and to Iran, a major trade route and lifeline for supplies… and the Armenian government sat idly by and instead built a dirt road through the mountains of Syunik, not very accessible or practical for large supply trucks.

Remember that while the people of Artsakh continue to endure the ongoing blockade as they face a humanitarian crisis, they continue to demand their right to self-determination; they called on Armenia to stop making concessions to Azerbaijan, while Pashinyan and his supporters in Armenia and the Diaspora talk about peace without securing the rights, freedoms, and safety of the people of Artsakh.

Remember that Erdogan and Aliyev are partners in their goal of creating a pan-Turkish empire, the first step of which remains to wipe out Armenia and Armenians in a modern e Genocide, and that the regional and super powers all have their own interests especially regarding Caspian oil.

Remembering all this we Realize that the falsely created, manufactured and manipulated divisions in the homeland and Armenian diasporan communities only weaken us and serve our enemies interests. Remember and realize that “they” have been trying to divide us and eliminate the national agenda since the times of the Armenian Fedayees, during the Soviet era, the Armenian struggle and Hye Tad years, the liberation of Artsakh and the rebuilding years, until now, and continue to do so today, especially in the US, home to one of the largest and most influential Armenian communities in the world.

Realize the sad reality that it wasn’t enough.

Realize that 120,000 people are still being held hostage today.

Realize that Armenia is exposed and at great risk without Artsakh…

Now resolve to do more!

And do more with a unity of purpose based on national priorities starting with the safety and security of Artsakh irrespective of personal preferences and political affiliations but with focused action on this higher purpose where 120,000 lives are on the line today in Artsakh, and all of Armenia tomorrow.

Remember the past including mistakes and successes and assess the current situation to forge the future; with sacrifice, commitment, and focused action we can truly be successful and secure the safety of our brothers and sisters and the future of Artsakh, Armenia, and the Armenian people everywhere.