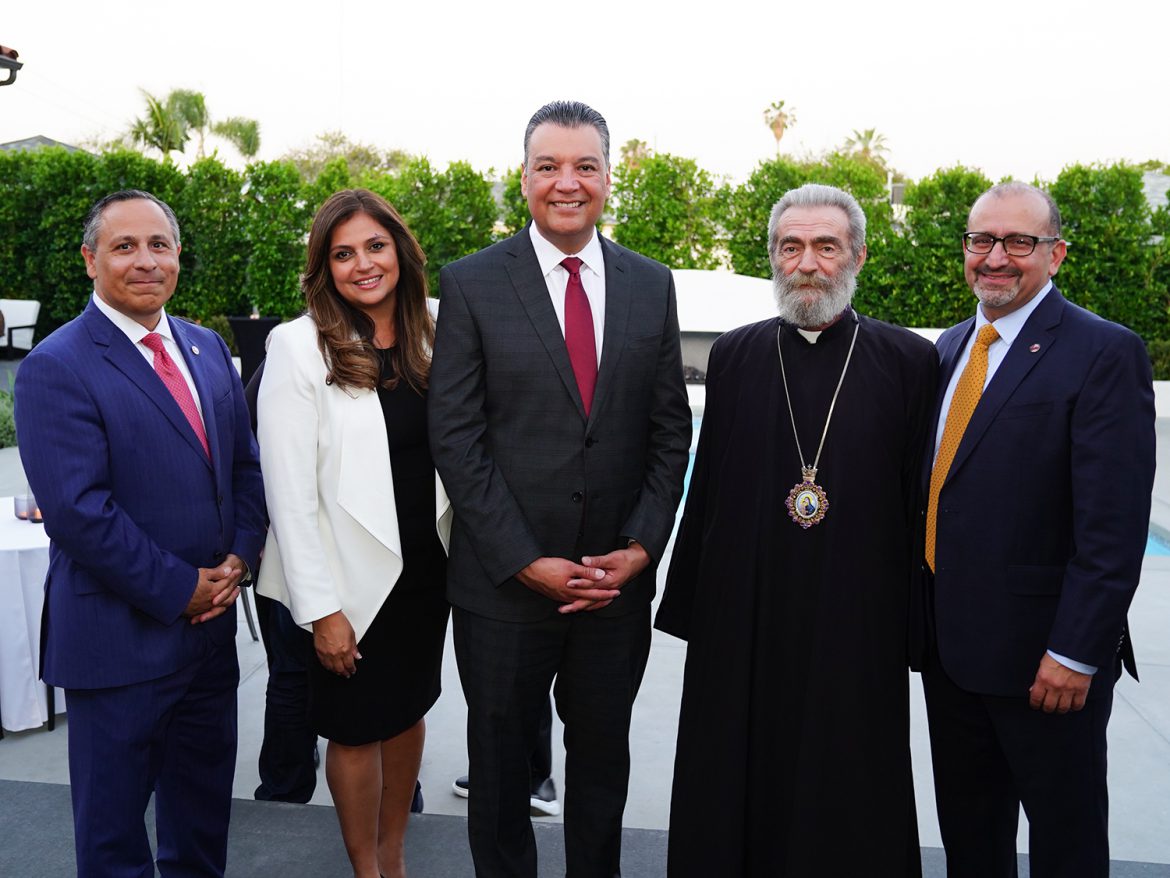 MONTEBELLO, CA –  On a beautiful evening at the home of Murad and Armine Minasian, Armenian Americans and other key stakeholders gathered to support the election campaign of U.S. Senator Alex Padilla, a champion of Armenian National Committee of America (ANCA) policy priorities.

The May 6, 2022 event was held at the Minasian residence in Montebello, the historic heart of the Armenian community in southern California, where thousands of Armenians settled after arriving in the United States as displaced people following the ravages of World War II.  The event for Senator Padilla attracted a broad range of key political stakeholders, including Glendale Mayor Ardy Kassakhian, longtime ANCA supporters and advocates Stepan Boyadjian and Ara Bedrosian, and many public officials from Montebello, Pico Rivera, Glendale, and surrounding cities across the San Gabriel Valley.

The Minasian family was honored to have His Eminence Archbishop Barkev Martirosyan, Holy Etchmiadzin’s Pontifical Envoy-at-Large and former Primate of Artsakh, present at the gathering. Archbishop Martirosyan offered a special prayer and conveyed to Senator Padilla the appreciation of the Armenian people for his leadership on issues related to freedom and liberty for the heroic people of Artsakh.

“My wife Armine and I were pleased to host this event for Senator Padilla,” shared host Murad Minasian after the event.  “As the son of a proud Armenian family, I very much respect Senator Padilla for his honorable service in the U.S. Senate and his work on Capitol Hill on issues related to Armenia and Artsakh. It was especially meaningful that Senator Padilla was able to visit the Armenian Genocide Martyrs Monument in Montebello prior to joining guests at my home. This monument, which was completed in April of 1968 and rises over 75 feet in the air – was a symbol that my father worked hard to construct – along with members of our community. The enduring strength of the Armenian Genocide Martyrs Monument is a testament to the will of the Armenian people and the faith we must have today to stand by Armenia and Artsakh as they face enormous challenges to their very existence,” added Minasian.

As a member of the U.S. Senate, Senator Padilla has been active in backing a number of ANCA federal policy initiatives. After writing a letter to President Biden in April of 2021 to recognize the Armenian Genocide, Senator Padilla released the following statement, “Today’s recognition by President Biden and the federal government allows for us to work towards true justice for the victims, while also ensuring we pass on critical lessons to future generations.” The fact that the Senator focused his words on “true justice for the victims” is indicative of his understanding that recognition alone of the Armenian Genocide is not sufficient.

Working with the ANCA in Washington, DC, Senator Padilla offered a strongly worded amendment to the National Defense Authorization Act (NDAA) to require that the State Department and Pentagon deliver a report to Congress in response to 1) the discovery of U.S. parts in the Turkish drones deployed by Azerbaijan against Artsakh; 2) Azerbaijan’s use of white phosphorous, cluster bombs, and other prohibited munitions, and; 3) foreign mercenaries recruited by Turkey to fight alongside Azerbaijan against the indigenous Armenian population of Artsakh. A modified version of the Padilla Amendment was included in the final NDAA legislation signed into law by the President.

“The ANCA is proud of our strong and enduring relationship with Senator Padilla,” remarked ANCA National Board Member Zanku Armenian. “From his longstanding record as a local and state official – to his standing now as one of only 100 U.S. Senators – the ANCA deeply appreciates the Senator’s leadership on issues that matter for Armenian American voters across the State of California.”

Armenian continued, “We very much look forward to continuing our efforts with Senator Padilla to hold Azerbaijan accountable for the war crimes it has and continues to commit across Artsakh and Armenia. The ANCA is dedicated to the proposition that not one American tax dollar should be sent to Azerbaijan. In this effort, we are committed to working with Senator Padilla and other key members of the Senate – like Senate Foreign Relations Committee Chairman Robert Menendez – to achieve this urgent policy objective,” added Armenian.

U.S. Senator Alex Padilla is widely viewed on Capitol Hill as a problem-solver. He is the first Latino to represent California in the U.S. Senate. He was appointed in January 2021 to complete the Senate term of Vice-President Kamala Harris. The son of immigrants, Padilla grew up in the San Fernando Valley and studied Mechanical Engineering at the Massachusetts Institute of Technology. He was drawn to politics in response to California’s anti-immigrant Proposition 187.

Padilla was elected to the Los Angeles City Council in 1999 and the State Senate in 2006. As California’s Secretary of State, he oversaw a historic expansion of voting rights and voter participation. Padilla serves as Chairman of the Senate Judiciary Subcommittee on Immigration, Citizenship, and Border Safety. He is a member of the Senate Committees on Budget; Environment and Public Works; Homeland Security and Governmental Affairs; Judiciary; and Rules. Padilla lives in the San Fernando Valley with his wife, Angela, and their three sons, Roman, Alex, and Diego.

All photos are by Sahag Melelian.